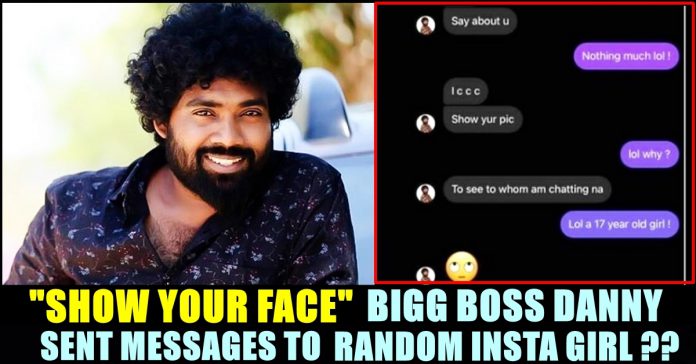 A series of screen shots showing the official Instagram handle of comedy actor Daniel Annie Pope texting to a random Instagram using girl and asking her to send a picture of herself is doing rounds in social media platforms. Users of the photo/video posting social media app is sharing the screen shots by tagging the Instagram account Dannie’s wife and we could see comments slamming the film actor based on the screen shots that got surfaced.

After acting as a junior artist in films such as “Polladhavan”, “Paiyaa”, “Rowthiram”, Daniel Annie Pope who is popularly known as Danny rose to fame among Tamil audience through his role in Vijay Sethupathi’s “Itharku Thaane Aasai Pattai Balakumara”. In the film, he played the role named “Romba Sumar Moonji Kumaruu” which received accolades from the viewers. After playing comedian roles in a number of films, Danny participated in the second season of Kamal Haasan hosting reality game show Bigg Boss.

He managed to stay inside the house for 77 days without getting eliminated and married his long time girlfriend Denisha as soon as getting out of the house. The couple gave birth to a baby boy in the year 2020. Currently, Danny is pretty much active in participating in the promotional events of his upcoming film “Vanakkam Da Mapla” directed by M. Rajesh.

The comedy actor is currently enjoying 1 lakh plus followers in Instagram and has uploaded 422 posts so far. Since the morning of Friday, a number of Instagram meme pages has been sharing a series of screen shots that shows the official Insta handle of the actor texting to a random school studying girl and asking her to send her picture.

An Instagram page named “Thonuchu Solliton” added the screen shots with a caption saying “I’m not adding the details of the girl . Daniel pope hitting random girls DM at late night and asking their pics. She’s a 17 years old school girl ( she’s Brilliant. Didn’t give him any of her details when he asked ) and this Daniel pope( couldn’t tag him ) is a married guy with a kid. He asked her to send her pics twice and its 2 a.m And asking her details. Don’t know how long he’s been doing like this.”

Check out the screen shots below :

Another Instagram page named Vadivelu memes which contains 9 lakh plus followers has also shared few other screen shots of the chats.

Jason Samuel who exposed a number of female celebrities for not endorsing the brands they got paid for, shared the post in his story and also shared a message he received from one of his female followers who accused Danny of doing the same to her years ago.

On seeing the message of the woman who said that Danny has asked her to send pictures and to meet, Samuels believed that more people will open up. Here’s the screen shot of his story :

Previous articleMS Dhoni Could Get Banned After Tonight’s Game !! Check Why
Next articlePavithra’s “Mithra” Look Made Samantha To Reply To A Fake Account Of Her !!