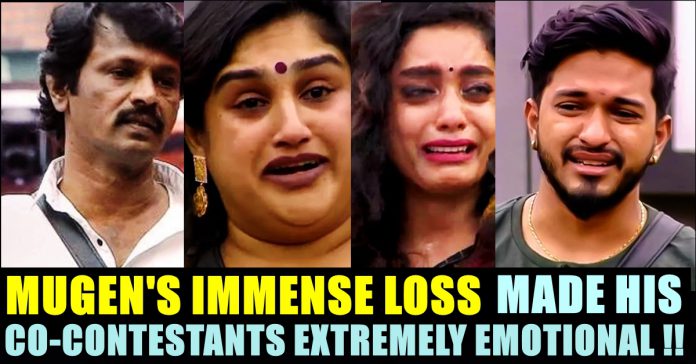 Mugen Rao who won the title of Bigg Boss season 3 faced the biggest loss of his life today and along with the fans, his housemates in the Bigg Boss house are expressing their condolences to the multi talented personality. Mugen Rao’s father Prakash Rao passed away in their hometown Malaysia after suffering a cardiac arrest around 6 : 30 PM on Monday. The last rites took place in Malaysia.

The 24 year old Mugen Rao broke the stereotype and became the first contestant to win the title after winning ticket to finale task. Mugen Rao often addressed his father during his participation in the game show and is devastated by the loss of the one who encouraged him to chose his field he wished.

The co-contestants of the young sensation expressed their condolences through their social media accounts. Cheran, one of the senior participant of the show said that his Bigg Boss win took place only for the happiness of his father. Check out his condolence message below :

Vanitha Vijaykumar also expressed her sadness through her official twitter account. “RIP…@themugenrao condolences to your family..very sorry to hear your loss …death in the family changes your entire life..be strong” wrote the actress.

RIP…@themugenrao condolences to your family..very sorry to hear your loss …death in the family changes your entire life..be strong https://t.co/aYPQJhqgH7

Abhirami Venkatachalam who has a special bond with the title winner posted her message through Instagram story. Check out the screenshot below :

Father of Mugen Rao has appeared in interviews when his son was staying inside the Bigg Boss house. “When he said that he is going to feature in Bigg Boss 3, I became happy as much as when he was born. Due to a small problem me and Mugen got separated for 1 year. But after a period, we asked sorry each other and sorted out the problem” he said. He even revealed that Mugen was locked up by police several time. “At least twice in a month, Mugen will be in police custody and it acted as my job to bring him home from there” he added. He even shared about many things that is happening around Mugen inside and outside Bigg Boss house including his relationship with Abhirami Venkatachalam.

Professionally, Mugen Rao is a singer and model who turned into an actor. He is based out in Malaysia who has huge fan followers in social media for his viral music videos. His Tamil pop single titled ‘Kayalvizhi‘, 2016 went viral in YouTube which made him more popular among the digital audience.

Let us pray for the soul of Mugen Rao’s father to rest in peace !!

Previous articleHansika Replied To Fan Who Asked For Her Whatsapp Number !! WATCH
Next articleFans Made Bear Grylls To Change His Tweet !!