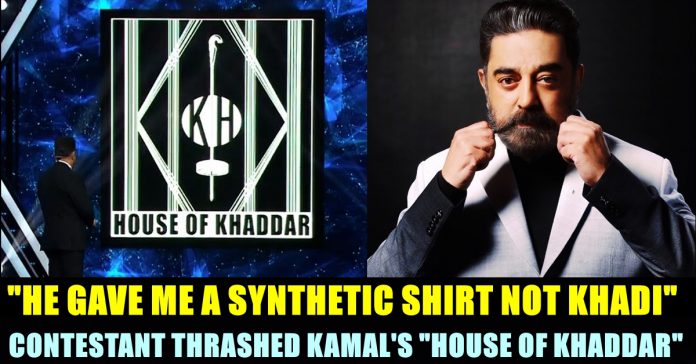 During the finals of Bigg Boss season four, Kamal Haasan launched his own fashion brand called “House of Khaddar” through which he is going to make collections which are entirely made of handmade fabric Khadi. “I want this to become a global trendsetter. I want to use this platform to start something new. This is more than a business and a social initiative that should provide empowerment and employment to many” Kamal Haasan said in the show.

Kamal provided the attires that were made in Khadi to the contestants of the Bigg Boss show which included the five finalists. He asked them to wear it for the special episode while launching his initiative. Now, singer Suchi who participated in the show as a contestant, came up with a social media post slamming Kamal and his “House of Khadar” initiative.

In the now-deleted post, Suchi wrote a poem about her experience inside the Bigg Boss house.

“Victory has been taken, by those who
deem it important
Failure has been gifted to the Deserving
The Victorious relish their silly victory
Knowing fully well, the Evil they are serving
The Puppet Master is an Asshole
And a jerk of the highest order
He leads the winner on
While the runner-up is safe in his border
When I said a Hero will rise, the Asshole
looked to the skies
And shot his solitary arrow
Pinning his near and dear close, yet failing
to hit target
He’s destined to re-begin as a loser from
tomorrow.”

Suchithra’s poem read. Here’s the screenshot of her post :

In the caption of her poem, Suchithra mentioned that the puppet is Kamal Haasan. She said that she was asked to pose a synthetic shirt as Khadi during the finals. “Puppet Master = #kamal and his stupid House of
Whatever nonsense brand (such pooooooor taste). I know l was given a synthetic shirt and told to display it as Khadi (owning up )…what a disgusting human being #emperorsnewclothes much Mr KH? #worstucharacters oru ruba kooda selav panla.. theendhu pochu kanakku ramar wastu…he’s a helpless man- not a God.” Suchi’s caption for the post read.

Here’s the screenshot of her caption :

Suhcithra also continued her poem. “The show does not go on, the game has ended, All those unfriended by me, have now been friended, The hungry fed, the vulnerable defended, It’s gonna cost you, coz now, The Gods have descended. Ps: Learn to serve your Godly Masters, E” she wrote and took a sly dig at “eye shadow girls”

Kamal Haasan, in the show, said that he recently visited the weavers of Kancheepuram and looked at their difficult plight. Saying that the craft is dying and the workers are getting low pay, Kamal announced “I visited a number of weavers and many of them are not having jobs and livelihood. I want this brand to make them way for the jobs” the actor said.

In few episodes, the actor also said that he was wearing “Khadi”. “Yes, I am wearing handloom Khadi suit. I recently got to meet a few weavers, and after that my approach to dressing has changed. I think my father’s habit of always wearing Khadi would come to me too. I wish you (youngsters) too to have that habit” he said to the contestants.

10 World’s Best Mom Quotes That You Can Download, Send, Show To Your Beloved Mother !!

After hearing Anitha Sampath uttering "item song" to mention the category of songs that takes place in films with no connection with the plot,...

Actor Suriya's press released against NEET examination irked the politicians who belong to BJP party. Actress and choreographer who is one of a prominent...