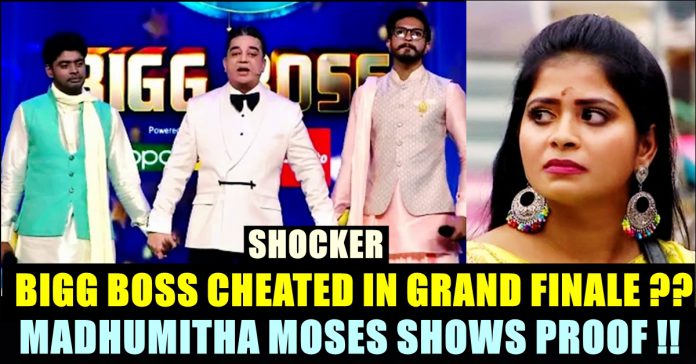 Bigg Boss season 3’s grand finale which was hosted by Kamal Haasan was streamed in Television on Sunday from 6 Pm. Mugen, youngest contestant of the show won the title surprisingly. Wishes are pouring from across the world for Mugen as he won the title of Bigg Boss season 3. He broke the stereotype and became the first contestant to win the title after winning ticket to finale task. In previous season, Snehan and Janani failed to hold the trophy after winning ticket to finale.

Unlike other Bigg Boss weekend episodes, the grand finale started streaming from 6 in the evening. Many contestants including Sakshi, Yashika, Kasthuri and Vanitha performed dance in the final stage. In the show which was telecasted, we could see Madhumitha’s husband Moses enjoying the finale performances. A particular shot shows his smiling on seeing Yashika’s stage performance.

Now to our shock, in a way of reacting to it, Moses posts a tweet in his twitter account. He seems to be very shocked and claims that he never went to the finale. He tagged the television channel and questioned about it which received no response yet.

“Omg😡😡😡😡 நா போகல… எப்படி இது நடந்தது???? @vijaytelevision” he wrote in his tweet by posting the video glimpse. Check out his tweet below :

Check out the screenshots and the post uploaded by the online user below :

Check out few reactions for this shocking discovery :

Madhumitha’s husband Moses is voicing out for her since the incident took place. For the uninitiated, Madhumitha was terminated by Bigg Boss for breaking rules. While terminating her, Bigg Boss said that during an argument between Madhumitha and the housemates after a task, the OK OK actress hurted herself to prove a point she stated. She was immediately terminated with initial treatment.

Following that, Madhumitha , a month before, filed a complaint against the show in Police station. In her complaint Madhumitha has stated that her co-contestants tortured her for 56 long days and said that it led to mental depression. She also said that they forcefully sent her out of the show on the 56th day.

What do you think on Vijay Tv reusing an old footage of Moses ? Comment your views !!

Controversial BJP politician H.Raja's statement about the demise of late jailor Jayaprakash, father of actor Sivakarthikeyan's has shocked the fans. The politician alleged that...

Finally, the moment millions around the world have been waiting for is here - Avengers: Endgame is being termed as the "most epic battle...