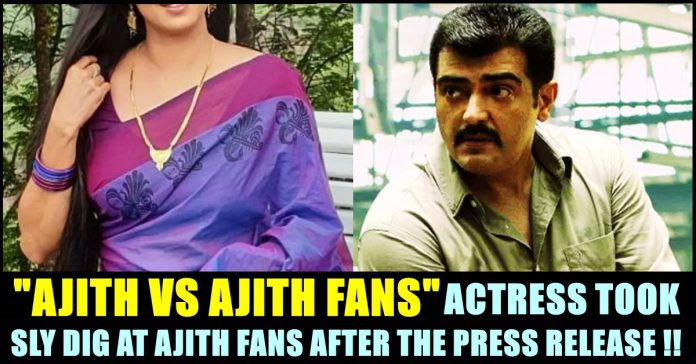 After the press release of actor Ajith regarding the behaviour of his fans in public events, actress and former Bigg Boss contestant Kasthuri who exposed a number of miscreants in social media earlier, came up with a tweet taking dig at the social media fans of actor Ajith kumar.

On Monday, actor Ajith kumar released a press note through his manager Suresh Chandra, suggesting his fans not to ask “Valimai” update in public, political and sports events. He also asked them to behave with dignity in social media platforms.

“As I earlier said, the updates will arrive during appropriate time and I would decide after co-ordinating it with my producer. Till that, I want you to be patient. For you cinema is an entertainment whereas it acts as my main occupation. The decisions I make are based on my occupation and social wellness. It is our behaviour which would increase the respect for us in the society” Ajith Kumar’s press release read.

The actor further asked his fans to maintain dignity in social media platforms and in public places. “I believe that people who truly love me would realize what I said and act accordingly” he concluded his note.

This press release garnered huge reception from media and fans in no time. Hashtag “Ajithkumar” is trending at the top in the micro blogging social media site. Meanwhile, actress Kasthuri who reported Ajith fans for verbally abusing her, came up with a tweet taking a sly dig at them. Earlier, she even seeked Suresh Chandra and Ajith kumar’s attention in reforming the actor’s fans.

“Don’t defame Ajith Kumar by saying that you people are his fans. If you are in desperate need of a girl, go ask you mother and sister instead of searching out” Kasthuri tweeted in January, 2020 against Ajith fans.

She continued to slam them with her several other tweets.

So proud of these #dirtyajithfans. Their only job? Sexual abuse and negative tagging on twitter. Instead of curbing the miscreants, you indulge in ganging up and collective bullying. Just proves how hopelessly dirty you are. #தமிழகத்தின்_தலயெழுத்து #தலவலி pic.twitter.com/vNZOMPQOLP

The last time Ajith kumar released a press note was to clarify that he never endorsed any political party through his fans. “I never forced my fans to support for any political party and I won’t in future. I see cinema as an occupation and I did not come to fight against anyone. I insist the same to my fans. I never expose my personal interest in politics and I want my fans to be in the same way. I never supported social media trolls and abuses in any way and the world would never forgive us for such act.” he said in his statement and even requested his fans to concentrate in their studies and in their responsibilities.