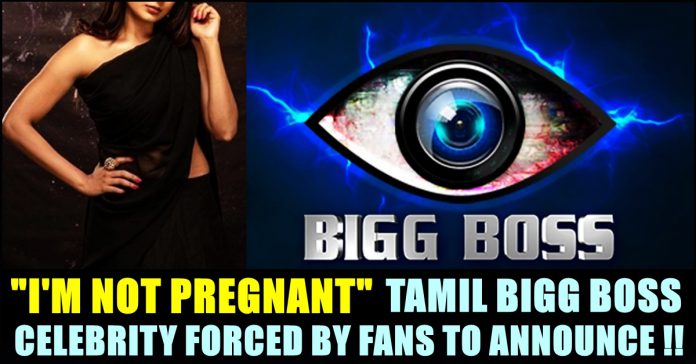 Now one of the wild card entrant in the Bigg Boss show was forced to announce that she was not pregnant due to the comments of her followers. Vijayalakshmi, the actress who got introduced to tamil film industry through Chennai 28 in which played the role of a love interest of Mirchi Shiva. She also played the female lead in Mysskin’s cop thriller “Anjathe”. Vijayalakshmi Feroz walked out of Nayagi serial to enter the Bigg Boss Tamil 2 house as a wild-card entrant.

After her Bigg Boss stint, the actress became very active in social media platforms, especially in Instagram. Vijayalakshmi married her former school mate, Feroz Mohammed, in September 2015. Feroz later became a film director through Pandigai, while the pair had a son in May 2017 and named him as Nilan.

Now the actress has shared a picture of herself from her pregnancy period in a way of celebrating it. She motivated many women through her post by saying that she was told many scary stories during her pregnancy period and how she went through all of them. She even posted a hashtag which said “Women Are Lucky”. Check out her post here :

Throw back to the most celebrated 9 months of my life! I was told scary stories.. my body will never be the same again. I won’t have time for myself.. All the love will go to the baby that our love life will take a toll. I was told everything is gonna change after a baby And everything changed. So beautifully. #womenrlucky

On seeing this post from the actress, many thought that she is again got pregnancy. Most of the comments received by Vijayalakshmi congratulated her for giving birth to second child. Check out some of the comments she received here :

These comments from her fans and followers forced the actress to clear the air on her pregnancy. She replied to them by saying that she is not pregnant now. “Guyssss… im not pregnant..! This pic was taken when I was preggy with nilan. I’m not pregnant now 😋😐” she wrote in her comment section.

On the work front, Vijayalakshmi is working in a movie called as “Kasada Thapara” which is expected to be released under Venkat Prabhu’s Black Ticket Company. She was last seen in the “Mankatha” director’s Chennai 28-2.

A gesture of Bigg Boss contestant Aari in the Wednesday episode impressed the users of Internet which is evident through the comments they are...