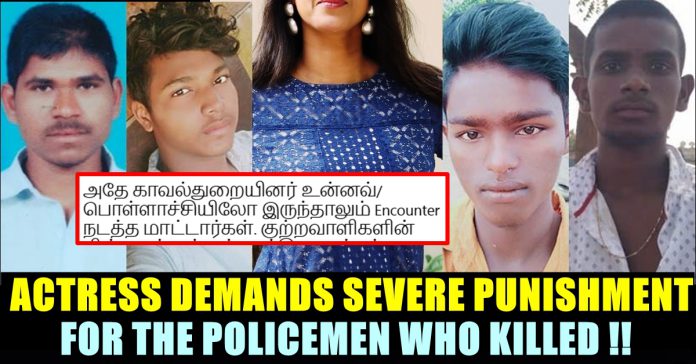 The number of crimes against women in India is increasing day by day. The series of recent happenings of rape and murder shook the entire country and is making a very big impact in social media. As soon as the pictures of the criminals who gang raped and murdered Priyanka Reddy released, people in social media demanded an immediate justice with severe punishment to them.

In a way of reacting to it, In a massive twist in the development of the rape and murder case of Hyderabad Veterinary doctor Priyanka Reddy, Police officers have shot the four criminals alleging that they tried to escape while they accompanied the criminals to the scene where the crime happened to reconstruct it. It was reported that two policemen have injured.

According to The News Minute, DCP Prakash Reddy who was at the scene said that the accused tried to escape by taking the guns of the policemen. “When they attempted to escape, the were shot dead” said the officer. The incident happened between 6 and 6 30 in the morning.

As soon as this news surfaced, it spread like a wildfire and various people are reacting to it by posting their respecting opinions. While one set of people are blaming the police officers for killing the accused without getting them an legal punishment, another set of people are celebrating it by saying that it is a lesson to people who think of committing such crimes in future.

Now actress Kasthuri, who is known for her controversial tweets has demanded a punishment for the policemen who shot the culprits. However, In her tweet she wanted them to be transferred to Pollachi or Unnao as punishment which made us understand the intention behind her tweet.

Check out some of the reactions she is receiving for her tweet :

Previous articleKushboo Gives Back To A Guy Who Made Irrelevant Comment On Her Post !!
Next articleRajinikanth & Kamal Haasan To Join Hands After 35 Long Years ?? Details Here