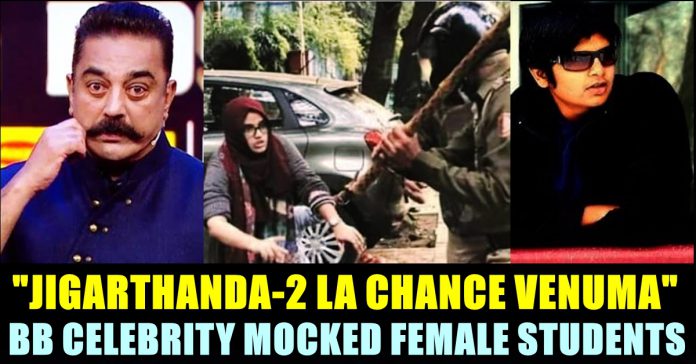 Hundreds of protesters took to streets blocking roads, burning tyres and shouting slogans in Assam as life across most parts of the northeast was hit on Tuesday, a day after the contentious Citizenship Amendment Bill (CAB) 2019 was passed in the Lok Sabha.

Video of a guy getting beaten by police officers amidst of female students went viral in social media. Pulled by his collar, he was dragged out of a house and slammed on to a road in South Delhi by the personnel of the Delhi Police on Sunday evening as protests against the Citizenship Amendment Bill rocked Jamia Millia Islamia University.

Undeterred by the presence of a gang of cops armed with batons that they hurled at anyone they could see, his four friends, all women, rushed towards him and formed a protective shield.

Celebrities like Pa.Ranjith, Karthick Subbaraj, Kamal Haasan, Siddharth, Anurag Kashyap raised their voice along with the students against the CAB bill. Check out their posts here :

Gayathri Raguramm, former Bigg Boss contestant and one of an active BJP member mocked all these cinema celebrities for supporting the students. She even degraded the students by calling them as “character artists”. Through her post she told the protesters to join in the casting of the upcoming movies of the above mentioned celebrities. Her post which contained the pictures of the protesters said “Character artist of congress. Indian 2 needs character artist and kaala2 and jigirdhanda 2. Please contact kamal Hassan Karthik subbajraj and pa.ranjith they liked ur performance for CAA”

This post received huge outrage as many people started trolling the Bigg Boss celebrity for her post supporting the act. It is notable that the actress got terminated from twitter for posting violated contents. Check out some of the reactions she is receiving now :

Previous articleGuy Questioned Megha Akash’s Dressing !! Here’s Her Reply !!
Next articleVairamuthu Removed From This High Budget Project Because Of Chinmayi !!

Veterinary Doctor IPS Officer Dr. R Stalin who is currently serving as the Assistant Superintendent of Police for Thiruvarur district, on Wednesday, came up...

Vishnu Vishal is one of a very few emerging actors who loves doing experiments in his films. He is the protagonist of the...