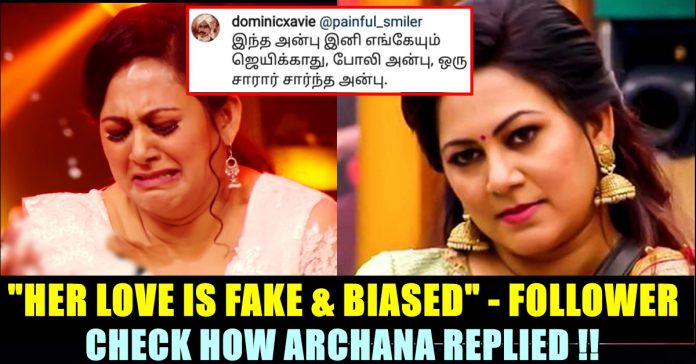 Even after the show reached its end, contestants of the Kamal Haasan hosted Bigg Boss reality show are still receiving love and hate based on their behaviour inside the Bigg Boss house. The after life of the celebrities who took part in the 100 days show is pretty much visible as they are super active in their respective social media platforms. Archana Chandhoke who is known for hosting shows since early 2000s, also took part in the show as a contestant and grew a strong bond with her housemates. Now, she is busy uploading pictures with her loved ones in her official Instagram account.

These posts from her garnered a large number of positive comments from her followers. Some of them spewed hatred as well. A follower said that Archana will never win and her “love” is a fake and biased one by writing “இந்த அன்பு இனி எங்கேயும் ஜெயிக்காது, போலி அன்பு, ஒரு சாரார் சார்ந்த அன்பு.” as his comment.

Replying to him, Archana, instead of arguing with him or bashing him, simply asked what’s his problem. “enna pa prechanai” she asked him.

Another follower said that even after Bigg Boss reached its end, the contestants of it are disturbing him. “Bigg boss முடிஞ்சு போச்சு இவங்க தொல்லை தாங்கல” he commented in a post of Archana in which she uploaded the pictures of herself with Anitha, Nisha and Anitha’s husband.

Here’s how Archana replied to him :

When a follower trolled her by saying “Kadavul irukkan Kumaru”, Archana stayed calm and made a subtle reply to him as well.

During the grand finale of the Bigg Boss show, Archana said that she came to know about the power of social media through her Bigg Boss stint. After getting evicted from the house, Archana announced that she is quitting from Twitter and said that she will bounce back stronger.

She stayed 66 days inside the Bigg Boss house. On the work front, Archana who acted in a couple of films so far, is all set to appear in Sivakarthikeyan’s “Doctor”. It is reported that she is going to appear in the film with her daughter Zaara Vineet.

The most awaited teaser of "Kaathuvaakula Rendu Kaadhal" got released on Friday evening with fans reacting to it in various ways. Starring Vijay Sethupathi,...

The Indian Prime Minister Narendra Modi is known for his wittiness and spontaneity and he once again exhibited his qualities when he gave speech...