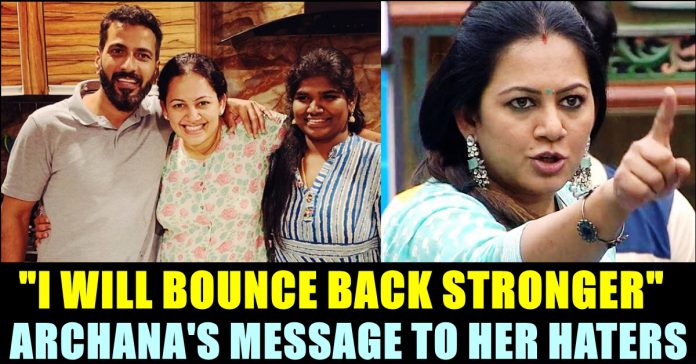 After getting eliminated from the cash-rich reality game show, Archana Chandhoke has announced that she is leaving twitter and sent a message to her haters in her final tweet. She who is pretty much active in social media platforms since her eviction said that is tired of clearing the speculations and asked her haters to find their next victim.

Archana Chandhoke, a TV host by profession, entered the Bigg Boss house as a wild card contestant. Initially, she was expected to play the game with the spontaneity which she used to have while hosting shows and interviewing celebrities. She who hosting shows for past several years is also known for her humour sense.

On seeing her restricting herself within a small circle of people inside the Bigg Boss house, fans of the show got disappointed and started criticizing her in social media platforms through their comments. They firmly believed that contestants such as Aranthangi Nisha, Rio raj and Soma shekar lost their individuality due to the excess amount of love poured by Archana on them.

Archana, after getting evicted from the show, saw the negative comments and decided to leave Twitter it seems. The TV host said that she got exhausted in the love-hate whirlpool. She who felt tired of clearing the speculation, informed her haters that she will bounce back stronger. She also asked them to find their next victim before signing off from the micro blogging social media site.

“I’m exhausted in this love- hate whirlpool!! Tired of clearing speculation!! For the haters who are all set to celebrate my exit from Twitter, I will bounce back stronger! Find your next victim! Goodbye Twitter!!” read the tweet of Archana. Also Read : Archana Replied To Trolls & Criticisms !!

I’m exhausted in this love- hate whirlpool!! Tired of clearing speculation!! For the haters who are all set to celebrate my exit from Twitter, I will bounce back stronger! Find your next victim! Goodbye Twitter!! #SpreadLoveNotHate #Iamwhoiam #LifeBeyondBiggBoss @vijaytelevision

However she is still active in other social media platforms such as Instagram and Facebook. Most recently, she uploaded a reunion post of herself with her Bigg Boss housemates Jithan Ramesh and Aranthangi Nisha. “The bonds of friendship that we forge along the way in our lives help us to navigate even the toughest of obstacles with ease. Muzhgaatha shipae friendship thaan. Love you guys !!!” caption of her post read.

Archana Chandhoke is widely known for anchoring TV shows such as “Ilamai Pudhumai”, “Kalakka Povathu Yaaru”, “Sare gama Pa” and others. She gained huge acclaim after interviewing Superstar Rajinikanth for Zee Tamil channel after 2.0 release. Archana, while getting evicted, said that she expected to stay inside the house only for 40 long days and expressed her happiness for staying longer than that.

One Of These Movies Is Going To Get Sequel !! OFFICIAL CONFIRMATION !!

Bigil and Kaithi are two of the movies released for the Diwali festival of year 2019. As Bigil got most number of screens, despite...

While the entire country did what Prime Minister Narendra Modi exactly said on Friday morning, Actor and politician Kamal Haasan expressed his disappointment with...

A huge protest was staged across the country by the supporters of party BJP seeking justice for the demise of 12th standard girl Lavanya...