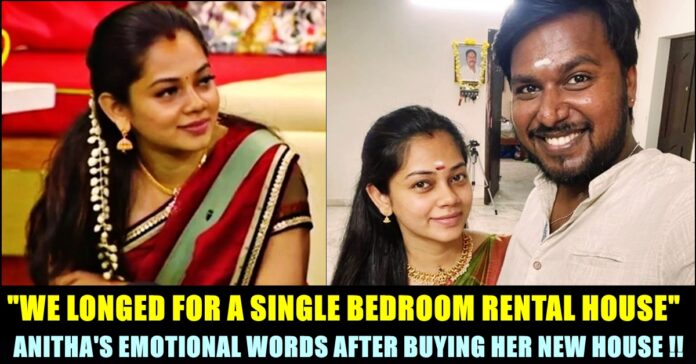 Anitha Sampath of Bigg Boss 4 fame and Bigg Boss Ultimate fame, came up with an emotional post in her official Instagram handle after buying her own house for the first time. The emerging actress who has started doing minor roles, has said that she and her husband Prabha bought the house after a lot of hard work and struggles and wished her followers who are reading the post to buy their own houses soon.

After starting her career as a news reader, Anitha went on to act in some films as news anchor/reader. She took part in Bigg Boss season 4 as a participant and got evicted after spending 84 days inside the house. During her stint, she got appreciated by Kamal Haasan for talking against superstitions that oppresses women in the Tamil society.

She went on to participate in the “Bigg Boss Jodigal” show and clinched the title along with Shariq. After completing few film projects, Anitha also took part in the “Ultimate” version of the show which was telecasted 24 hours/day in Disney Plus Hotstar. Running an Instagram account that has 8 lakh followers, Anitha is also maintaining a YouTube channel with nearly 7 lakh followers.

On Tuesday, Anitha came up with a post in her Instagram handle, announcing about the new house she brought along with her husband. “A House for our own is always the dream of both of us. There was times which is when we longed for a good rental house and a rental house with one bedroom. Prabha who was born and brought up in a Tiled Roof House also had similar dreams” Anitha said through her post.

“Now, we have bought a house as we liked. After a lot of pain, hard work and struggles, we have made the dreams of our mothers come true on Mother’s Day. I know truly believe the phrase “All our lives will change as we like it to change”. Those who are reading this will buy a new house soon and hearty wished from us for that. Thanks for making this happen pappu. Thanks for being with me at all my tough situations. Only positive vibes in our new home.Refreshing our love from a new place. We kept it very simple with less people. thanks to all who joined us and blessed”  She added.

Anitha married to her long time boyfriend Prabha who is a designer by profession. She often mentioned about him and about their love in the Bigg Boss show. Let us wish the lovely couple a happy and prosperous life ahead!!

Previous articleHashtag “Title Stealing Star Yash” Is Being Trended By Kannada Movie Fans!! Check Why
Next articleChinmayi Called Out Youtuber Biriyani Man For His Reply To Lady Pista!!

The Bigg Boss 2 Tamil episode began with ‘What a Karvaad’ song and goes downhill from there, especially for the women in house. First,...

Talking about 96 movie crew using old hit songs of him, Ilayaraja in an interview said that what the movie crew done is completely...