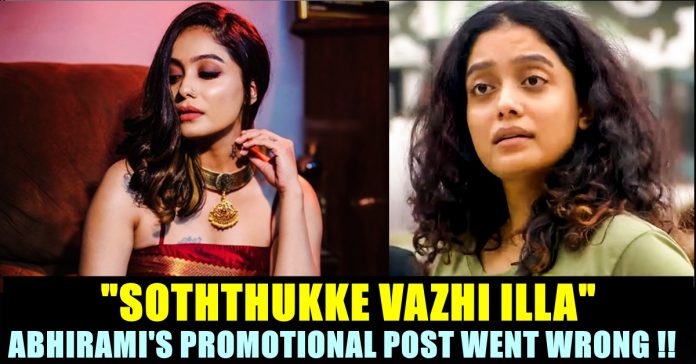 Tv stars and known models are busy promoting products in their respective social media accounts amidst this ongoing lockdown crisis. Abhirami Venkatachalam who got her face recognized through the third season of Kamal Haasan’s Bigg Boss show, also promoted a product in her official Instagram account.

She who shared about a hair moisturizer she is using, asked her 7 lakh 78 thousand followers to try the product.

Enormous number of her followers engaged the post of the actress with their likes and comments. Meanwhile one of her follower named as Jai Crazy said that people are struggling for food without work during this pandemic situation and asked Abhirami if the product is necessary for public.

“Sothuku eh Vali Ila..idhula nenga vera…thala mudi eh lam pathi pesuringa….” read the comment of the user to which Abhirami replied by saying that poverty will end if right actions are taken by the government. She also hinted that she is helping people during this pandemic and doesn’t wants to publicize it. “for that we are taking care … promotion is not necessary for that , if right action is taken that’s more than enough… I don’t like posting about helping needy….. dont worry bro that’s also taken care 👍🏼 Jai Hind” her reply read.

Check out the screenshot of her reply :

Followed by this, the Instagram user worried that even Tik Tok users are promoting irrelevant products to the public to which Abhirami replied by writing “no worries , pls you also help and be there for the ppl who need them ….”

She who fell in love with Mugen Rao, expressed it to him and everyone in and outside the Bigg Boss house. Even after her eviction she kept sharing pictures of him and adored him for his natural behaviour. She even met his family and spent some valuable time with them. However, as Mugen already got committed with a girl named as “Sparkle”, remained as Abi’s best friend. On the work front, the actress who appeared in Ajith Kumar’s “Nerkonda Parvai” is expected to appear in more films post lockdown.