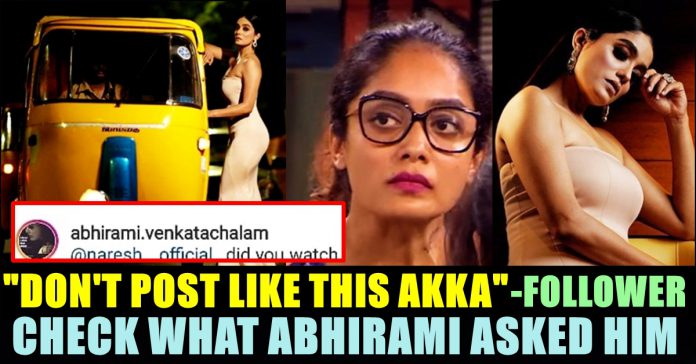 In this internet era, Photoshoots are playing a major role for the aspiring actors and models. Even top actors like Samantha, Sivakarthikeyan are participating in photoshoots occasionally to build their profile. It helped many forgotten actors to make their entry into film industry as well. The recent example for this is Ramya Pandiyan who became internet sensation through her recent photoshoots.

Check out the pictures from her photoshoot here :

To one of her picture, a guy who looked disappointed on seeing Abhirami in this attire had the courage to express it in the comment section. In his reply comment he wrote “Why akka posting like this😢fine..u gorgeous in saree”. This comment from is getting many positive responses which was evident through the 60+ favourites it received.

Abhirami who is very much interactive with her followers since her eviction, without confronting the guy, asked him whether he watched her Nerkonda Parvai or not.

In the movie NKP, actor Ajithkumar, protagonist of the film would iterate that clothes a girl wear could not define a girl’s character. The main theme of the movie is, even if she is a prostitute, if she says “no”, it literally means “no” which indicated that a man should not force a woman to do anything without her consent.

However, the who couldn’t understand the context of Abhirami’s question, answered to it innocently by saying that he watched it. He even appreciated the character “Famitha” which was played by Abhirami.

What do you think on this reply of Abhirami ?? Comment your views below !!

Fan Trolled Hip Hop Aadhi For Repeating The Same Theme In Every Movie !! You Must See Aadhi’s Reaction !!

Sivakarthikeyan has released the teaser of his next film, Mr. Local, on his birthday and left fans excited for the film. Mr. Local has...