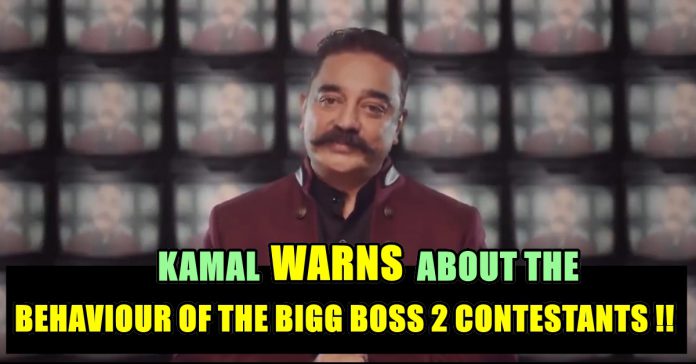 BIGG BOSS 2 Date Revealed & Kamal Warns About The Behaviour Of The Contestants !!

The much-awaited reality TV show Bigg Boss Tamil will be returning with its second season in about two weeks from now. According to sources, the show will begin on June 17 (Sunday). The show’s producers have stepped up the promotions with new promos. Tamil superstar Kamal Haasan has been retained to host the upcoming season. The latest promo suggests that this time the show will explore the concept of “who is the hero and who’s the villain,” an existential question that has followed Kamal since Nayagan. Several names, who are said to be the probable contestants, are doing the rounds. Power Star Srinivasan, actor Bharat, Kasthuri are rumored to be likely contestants of the show. The showrunners, however, are also not keen on revealing much. Bigg Boss Tamil Season One instantly became one of the most watched televisions shows among the Tamil audience last year.

The viewership of the show was pegged at 6.5 crore impressions worldwide. “Bigg Boss Tamil has written a new chapter in the history of South Indian television entertainment and that still would be an understatement. Thanks for giving me such a big success in my career as a television host. I consider it as a big fortune,” Kamal had said during the finale of Bigg Boss Tamil Season One last October. Riyaz Khan, A famous Indian actor who is popularly known as “Kattadhurai”,Rio Raj , a TV actor and Video Jockey are also expected to take part as contestants.

In a series of promo videos a recent glimpse of Kamal Haasan surfaced and in it he defines the behaviour of the contestants who are going to take part in the show. Previously a promo showed Kamal reacting for the participants while he sees them in his phone. Watch the two promos below :

Followed by the several names that are doing rounds among the Internet users regarding the 15 celebrity contestants of the upcoming BIGG BOSS ...

Vikranth’s Special Message To Shanthanu For Joining Thalapathy 64 !! Check OUt The Reactions !!

Amidst of the waves of BIGIL, the updates of Thalapathy 64 hitting the Internet like storm for past three days. The production house of...