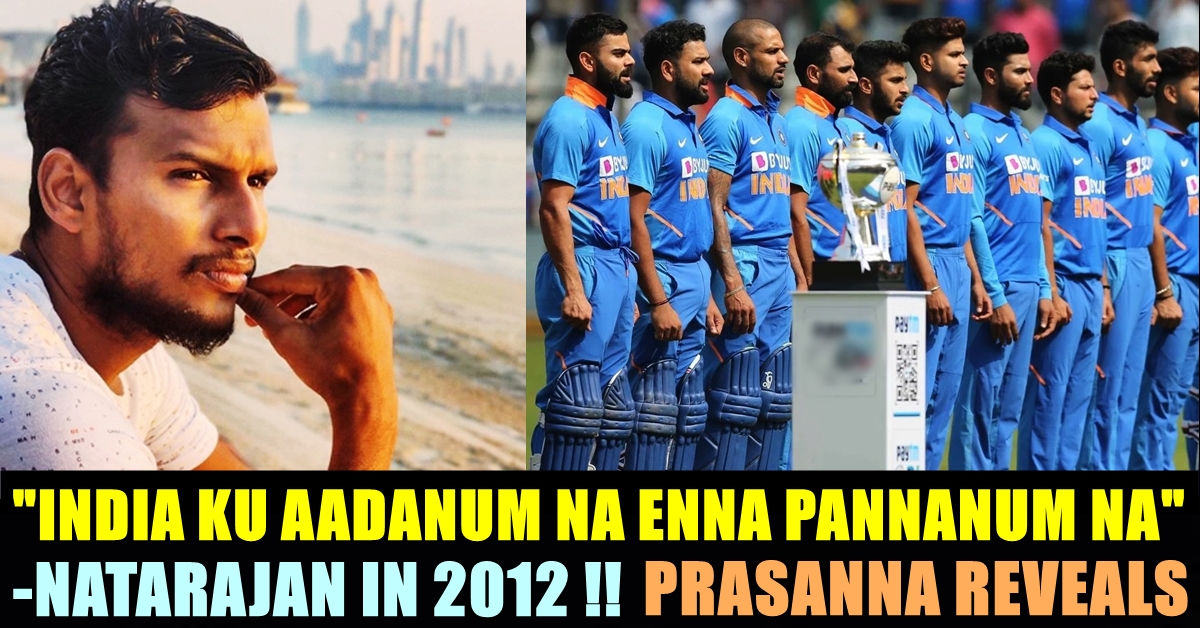 Varun who was playing for Kolkata Knight riders in the 13th edition of IPL tournament, ended the tournament by taking the most number wickets for his team. He picked up 17 wickets in the 13 games he played which includes a fifer against Delhi Capitals. His economy rate is also impressive as he has conceded just 6.84 runs per over. Chakravarty reportedly has a labrum tear on his right shoulder which generally requires a surgery. “He did not opt for the surgery as he wanted to play the IPL” said a source to the media according to TOI.

Bad News: Varun Chakravarthy has been ruled out of the Australia T20I series owing to a shoulder injury.

Good news: The selectors have named T Natarajan as a replacement.

Imagine Nattu bowling in tandem with Bumrah at the death for India! 🔥

Earlier, Natarajan was announced as a part of the touring contingent but was not named in the main squads. He was previously named only among the reserve group of net bowlers. Natarajan is considered as a major find of the IPL season. He made a big impact in the tournament by taking 16 wickets with 63 yorkers which is highest by any. His accurate yorkers in the death bowling impressed selectors big time it seems.

As soon as the news surfaced, fans of Tamil nadu could be seen emoting mixed feelings as Varun is getting ruled out and Natti making his entry in his place. Meanwhile, a tweet posted by Prasanna, a popular Tamil speaking performance analyst of South African cricket team is going viral is the social media platforms. He who accurately predicts the performances of teams and individual players with sheer facts and statistics, gained social media fame after appearing in the youtube channel of Ravichandran Ashwin.

A post shared by Natarajan Jayaprakash (@natarajan_jayaprakash) on Sep 8, 2020 at 3:55am PDT

Through his recent tweet, Prasanna revealed about a conversation of himself and T Natarajan which took place 8 years ago. He who was working personally with Dinesh Karthik at that time, met Natarajan as a net bowler. On seeing his bowling skills, Prasanna requested DK to play him more.

Prasanna revealed what Natarajan used to ask him at that time. “India Aadanum na enna pannanum na ??” (What should I do to play for India ?) Natarajan asked Prasanna to which the analyst replied saying that he should have that determination and encouraged him. Now, on seeing him getting selected for the national team, Prasanna wished him the best by tagging him.

“When I worked personally with DineshKarthik in 2012,young Leftarmseamer used 2come as a netbowler n I requested DK 2get him everyday 4our practice.He used 2ask India adanumna Yenna pannanum na ? My reply was adanumgara veri irukanum it will happen.Congrats @Natarajan_91 u made it” Prasanna’s tweet read.

Natarajan Thangarasu is a Tamilian who belongs to a small village named Chinnappampatti of Salem which is located 340 Kms away from Chennai. People of his place consider him as their “Chella Paiyan” as anyone would show directions to his house if we visit the area.

Natarajan’s father is a Saree weaver and his Mother ran a road side shop where people fell in love with her beef fry. He was the eldest of his five siblings. Everything he earned from cricket, Natarajan giving it back to the sports by running a free academy in his village. He doesn’t charge the 50-60 students who are learning the sport there. The academy is well received among the Tamil nadu players and is expected to get a wide reach from this year as he looks promising in his career.