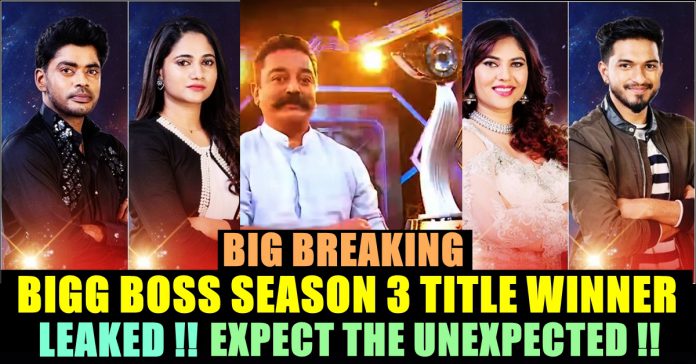 Bigg Boss season 3 is going to see its end tonight and the fans couldn’t keep calm as one of the longest game show which entertained them for 105 consecutive days is getting wrapped up tonight.

Bigg Boss show kept netizens busy in daily basis with three promos and a show streaming time for 1 hour per day. Many incidents that took place inside the house became the subject of debate in social media platforms. The show which started with 17 contestants is now having 4 of them as finalists. Many twist and turns took place throughout the game show and yesterday, the Kamal Haasan interacted with them for one last time.

Unlike other Bigg Boss seasons, this third has faced controversy after controversy. It is notable that Meera Mithun and Vanitha Vijayakumar was investigated by Police inside the Bigg Boss house. Along with that Saravanan’s immediate termination, suicide attempt of Madhumitha, physical harassment allegation on Cheran, this season has grabbed headlines almost everyday since the start.

As far as the Bigg Boss finals is concerned, there is a tough competition between the four finalists. Majority of people are raising their voice for Mugen and equal number of fans are voting for Losliya which is evident in the feeds of social media platforms. Sandy also has every reason to win the title as he gained a separate fan following. Sherin was also expected to win the finals as she beaten Tharshan in previous week which is a shocker and fans are expecting it to happen in finale as well.

Now to our surprise, the winner of Bigg Boss season was leaked and it was reported that the Malaysian model and singer Mugen is going to hold the trophy according to sources. It also revealed that Sandy has been elected as the runner up of Bigg Boss Tamil season 3 and Losliya ended up in the 3rd position which technically makes Sherin in the fourth place.

Check out some of the reactions for the success of Mugen :

And the Winner of #BiggBoss3 is MUGEN 😍

What do you think on Mugen winning the title ?? Comment your views below !!

Previous articleFamous Actress Slammed Tamil Cinema Audience For This Reason !! CHECK OUT !!
Next articleEXCLUSIVE : Awards Received By The Non-Finalists Leaked !! MUST CHECK !!

Ritika Sajdeh, wife of Rohit Sharma, captain of Indian cricket team lost her cool after seeing the photographs and videos that were shared by...

Chiyaan Vikram Couldn’t Resist Himself From Sharing This Video About Rishi Sunak!!

Actor Vikram who is fondly called as "Chiyaan" by fans, shared a video of "The Daily Show" about Rishi Sunak, the recently appointed Prime...