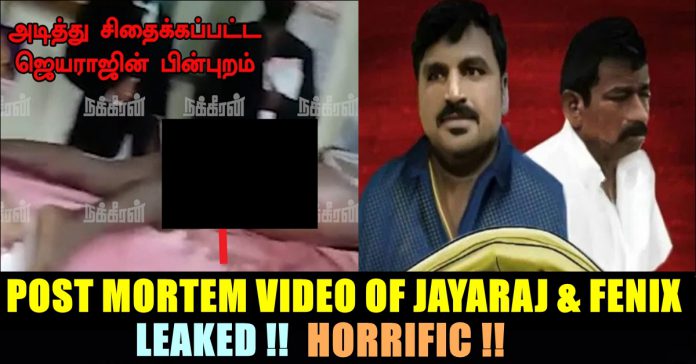 The incident of Father Jayaraj and his son Fenix getting killed due to police brutality created huge outrage across the nation. People from all the directions of social media condemned the act of the Sathankulam police officials. Madurai high court voluntarily investigated about the case as a result of the public outrage. The case which was investigated by CB CID initially, was transferred to CID after the order of Madurai high court branch.

As the investigation is currently on, a video of magistrate inspecting the bodies of the victims has been released by Nakkheeran. The unblurred video shows Fenix’s severely injured gluteal region and Jayaraj’s injured face. Earlier reports suggested that Police officers of Sathankulam including Inspector Sridhar involved in physically torturing the father and son duo for not closing their shop at the right time amidst lockdown norms.

WARNING : The video contains unblurred footages of the injuries of the victims.

It is widely believed that the Police officers of Sathankulam tortured them with lathis and beaten them black and blue after stripping their clothes off under Inspector Sridhar’s supervision. Fenix’s elder sister Perisis, after seeing the bodies on the night June 24, has said “Munnadiyum Pinnadiyum onnume illa” (There was nothing left on the front and rear of the bodies) to the reporters in Tuticorin. As she said, the video evidently shows the gluteal region of Fenix being ripped off by the police officers.

As soon as released, the video went viral in social media platforms with people demanding immediate justice for the victims. Friends of the victims who witnessed the incident in person, while talking to the media, recounted the horrific sequence of events. Police have asked Rajkumar (friend of Fenix) to bring their own vehicle to transport Jayaraj and Fenix from Police station to Sathankulam government hospital. Rajkumar says that he was unaware of the physical torture until he witnessed them coming out of station with torn pieces of cloth and were covered in blood.

“They complained of severe pain in their rectums. We immediately gave them a lungi and spread a thick cotton cloth on the car seat, so that it would not hurt them” rajkumar said. However, the given lungi became wet of blood soon after they sat on it. So the friends gave them another set of lungis before they entered the hospital, Rajkumar said. The cops also forced the hospital doctor Vennila to give fake reports to produce them in front of judge.