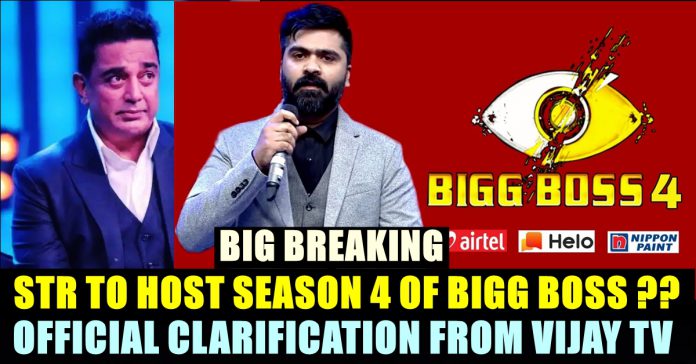 Bigg Boss show is keeping netizens busy in daily basis with three promos and a show streaming time for 1 hour per day. Many incidents that are taking place inside the house becomes the subject of debate in social media platforms. Ulaganaayagan Kamal Haasan is hosting the show since the first season.

Kamal Haasan’s significant way of hosting the show impressed Tamil audience very much for the past 3 seasons. Unless Salaman or any other Bigg Boss host, Kamal Haasan’s way of bringing social issues in this highly watched reality show to make people aware, is being appreciated. Kamal Haasan in a recent Bigg Boss episode addressed the death of Subashree who died because of an illegal political hoarding.

In last season, Kamal Haasan once told that he suggested Vijay Tv not to bring the pattern of north Indian’s Bigg Boss as it contains a whole different culture. He even asked the Tamil Bigg Boss management not to fill the water in swimming pool by considering the water scarcity in Tamilnadu.

The actor with his influence brought back “Pommalattam”, an old form of storytelling in this season of Bigg Boss show. Kamal Haasan who is hosting the show for the third consecutive time, never expressed hatred towards one particular contestant or bashed them directly, instead he would make sure they understood the consequences from their behaviour with the consideration of their future after the Bigg Boss show.

As the actor now became very much busy in working for his political party Makkal Needhi Maiam and Indian 2, speculations surfaced that Simbu is going to host the fourth season of Bigg Boss show as he did judging for reality shows such as JODI NO.1 in Vijay television in previous occasions.

Now in a way of proving them wrong, Vijay Television made sure that Kamal Haasan has been retained as the host of Bigg Boss show for the fourth season as well. “No idea of changing the host in near future and we have not approached any other actor to host the show as well. Kamal Haasan is going to host the 4th season” said Vijay Tv according to sources.

Vijay Tv has bought the permission to conduct Bigg Boss show for 5 long seasons and it is now confirmed that 4 of them are going to be hosted by Kamal Haasan. This news excited the netizens and they are expressing their thoughts in social media platforms :

Good one ❤️👌 He is being a great host. No one can match him 😍

What do you think on the way Kamal hosting the next season ?? Comment your views below !!

Agni vs Devi is an upcoming political drama film produced and directed by JPR and Sham Surya. The film is produced by JPR and...