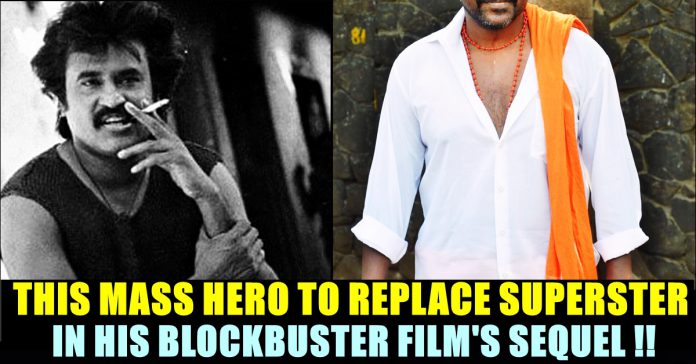 Multitalented Raghava Lawrence who is known for his Muni series, is also known as an ardent fan of Super star Rajinikanth. The dance master now came up with an announcement of his lifetime. He announced about the next project which is going to be a sequel of his idol Superstar Rajinikanth’s Blockbuster film. Raghava Lawrence who is currently busy in directing Bollywood Superstar Akshay Kumar in Kanchana remake, in his recent press release, has said that his next film is going to be the sequel of blockbuster horror thriller Chandramukhi.

The sequel is going to be directed by P. Vasu himself, said the statement of Raghava Lawrence. The actor has happily informed to the fans that he is going to do the role of a protagonist in the film with the permission of Superstar Rajinikanth. The most important aspect of his press release is, that the actor has decided to donate 3 crores to the people of Tamilnadu to prevent Coronavirus. He said that he is donating to the people from the advance he received to act in Chandramukhi-2.

Among the 3 crores, Raghava Lawrence is going to donate 50 lakhs to PM cares, 50 lakhs to CM relief, 50 lakhs to dancers union, 25 lakhs to physically abled boys and 75 lakhs to the daily labour’s and for the people from his birthplace Royapuram, Desiyanagar. “All food essentials will be delivered with the help of police with proper safety” he said in his announcement.

This generous gesture of the actor is being lauded across the Internet. Lawrence always had an eye for the poor and needy which is evident through his several activities in all these years. The actor was last seen in the 4th part of his Muni which also became a blockbuster.

Chandramukhi is a supernatural thriller film which had Nayanthara, Jyothika in the lead role. It is the only film to have a theatrical run of 1000 days. The film also acted as a comeback of Superstar Rajinikanth’s career after Baba’s flop.

He is currently working in “Annaththe” directed by “Viswasam” fame Siva. Director Siva is known for his commercial blockbusters such as Siruthai, Veeram, Viswasam etc. Fans are expecting for a “Padayappa” kind of commercial film from this combination which is evident in social media. Director Lokesh kanagaraj is also in the cards to direct Rajinikanth under Kamal’s Rajkamal productions.

Comment your views on Chandramukhi-2 being Superstar’s next film !!

Veteran actress Rekha became the first participant to get eliminated from the season four of Bigg Boss show which is being hosted by Ulaganayagan...