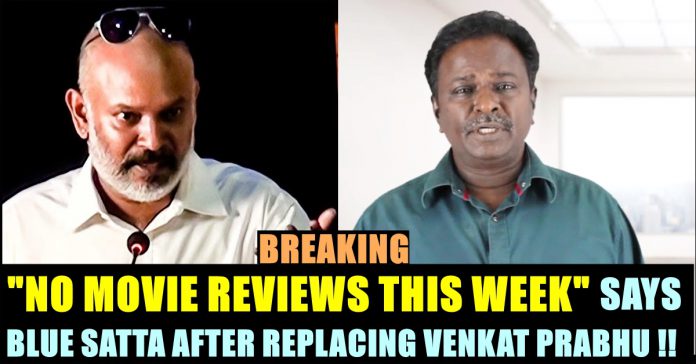 He is also known as one of the controversial reviewers in the industry as he had clash with the makers of the films often. “Goli Soda” Director Vijay Milton condemned him for the way he reviewed the movie “Vivegam” which had actor Ajith in the lead.

Recently a case was filed against him by “Amma Creations” Siva for his way of reviewing Charlie Chaplin-2 movie. In the review he criticized the makers by accusing them for not having common sense.

Maaran is one kind of a reviewer who enjoys a massive fan base and equal number of haters. Probably he would be the person whom the people of Tamilnadu asked to make a movie the most for his way of criticizing other movies. In a way of replying to them, the reviewer recently announced that he is going to make his directorial debut in his official twitter account.

Now it has been revealed that Suresh Kamatchi, is going to produce the movie under his banner V creations. We all know that Suresh Kamatchi was supposed to produce a movie with Venkat Prabhu by having Simbu in the lead role. Unfortunately it didn’t elevate as per plans as Simbu said that he opting out from the project without a proper reason.

“It’s very unfortunate that I couldn’t work with my brother #str in #maanaadu Everything is time bounded. Considering the amount of emotional and financial pressure that the producer is going through, I have to respect the decision taken by the producer. Thnks for all the love! ” said Venkat Prabhu while expressing his sorrow for not able to make a movie with Suresh Kamatchi.

It’s very unfortunate that I couldn’t work with my brother #str in #maanaadu Everything is time bounded. Considering the amount of emotional and financial pressure that the producer is going through, I have to respect the decision taken by the producer. Thnks for all the love! 🙏🏽

Now, Suresh Kamatchi has selected Maaran to direct his next film which surprised the Kollywood. Maaran has faced the wrath of director’s union and producer’s union in previous occasion for his way of producing movies. Suresh Kamatchi being one of the important member of producer’s council has provided the opportunity to the reviewer.

Followed by this news, Blue Satta has announced that there will be no movie reviews for this week in his official twitter account.

It seems he is busy in the pre production works of his debut movie. Blue Satta has worked in movie sets for a long time in direction team which was revealed by himself in some of his movie reviews. He is an ardent world movies enthusiast which is also evident through his reviews. Let us wish him all the good for stepping on to the next level of his film career.