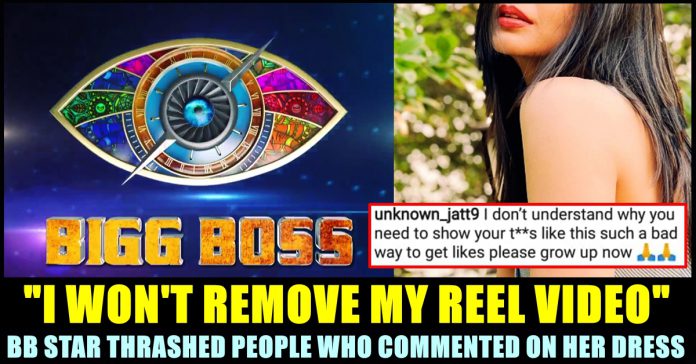 Reality Television star Divya Agarwal slammed perverts who objectified her new reel video through their comments. She who denied to delete the video, said that she saw nothing while shooting and uploading the video. She also expressed her concern for the girls who are living around the perverts. The bold reaction from the actress grabbed national attention with the support of several women and men.

On Monday, Divya Agarwal who is enjoying 2 million plus followers for her Instagram account, uploaded a reel video with a caption saying “Trying the trend for once”

Despite of the wide reach and accolades from her pals, a bunch of people started making obscene comments, pointing out her cloth. A follower criticized the actress by saying that she is showing her skin to get likes whereas many others shamed her in similar way.

Frustrated on seeing these comments, Divya came up with a series of stories slamming people who body shamed her. “People commenting sht and objectifying me on my latest reel are the only ones that look at things in a certain way. When I shot and uploaded I saw nothing like it.. You think I’ll remove the reel after realising b*bs are seen? You are so wrong trust me I’m just worried about the women around you perverts” she said in her first story.

“Censored the word so it’s not reported and secondly I don’t get affected at all. I want the girls to give them back and teach them a lesson every time these perverts speak rubbish” Divya’s next story read.

Being a model and dancer, Divya Agarwal has acted in a number of Television serials and has participated in several television reality competitions. She made her acting debut in the season 2 of the horror web series Ragini MMS: Returns. She has appeared on numerous music videos. As a choreographer, Divya worked with several high profile heroines including Ileana, Sunny leone, Shilpa Shetty etc. Her participation in 11th season of Bigg Boss show gained her more fame.