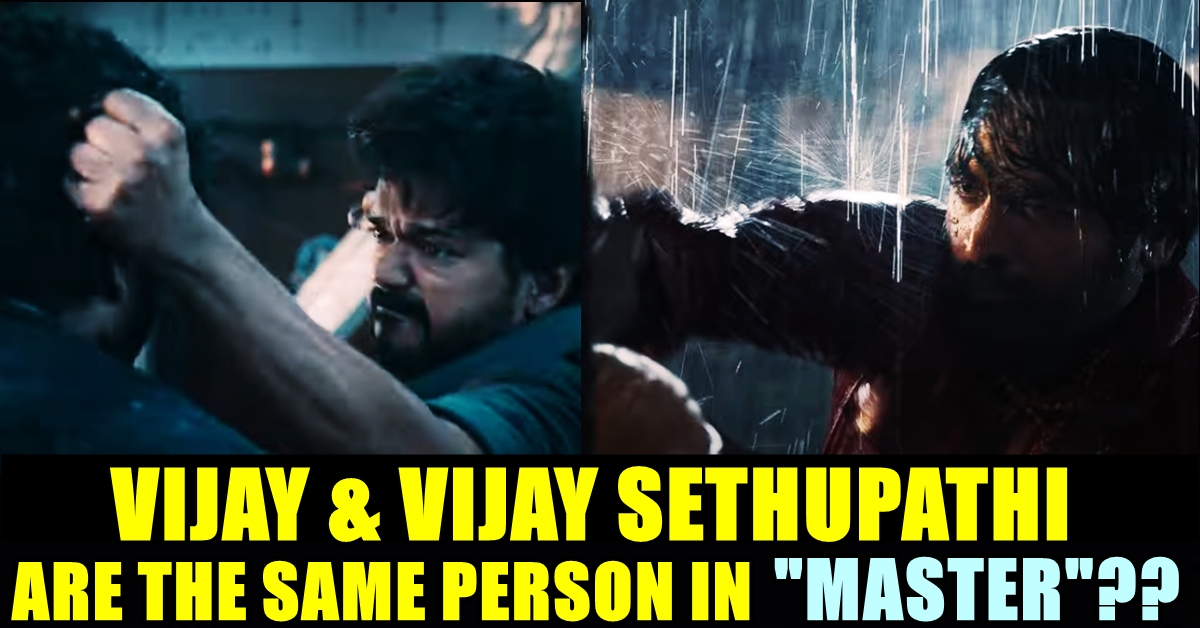 Amidst all the speculations and assumptions regarding the plot of the most awaited “Master”, a prediction surfaced saying that the film’s core idea could be influenced from David Fincher’s 1999 flick “Fight Club”, a film considered as the pioneer for all the films that are based on the dissociated personalities in a same body. In the film, the protagonist (played by Edward Norton) would interact with Tyler Durden (played by Brad pitt) throughout the film only to realize in the end that he was no one but himself. The film became a cult classic and influenced many filmmakers to write plots based on similar idea.

Now, on seeing the 90 seconds long teaser of Vijay-Vijay Sethupathi’s “Master”, a number of fans came up with proofs describing that the film could be influenced from Fight club which means Vijay and Vijay Sethupathi could be the same person in the film.

As we can evidently see, the number of scenes Vijay and Vijay sethupathi sharing screen space in the teaser are very less. A social media user named as Aditya T Pangu believes that Vijay is living as a lecturer in day time and involved in gangsterism during the night time. Having said that, almost all the scenes Vijay Sethupathi appearing in the teaser were shot in night time. In fight club, the protagonist would suffer from “Insomnia”.

Watch the teaser of “Master” below :

The dialogue Vijay Sethupathi uttering in the teaser “Antha Vaathi oru maadhri mandaikulla odikitte irukaan” (That Professor disturbing me a lot mentally) might be a hint to reveal that Bhavani (Vijay Sethupathi) is slowly getting occupied by the character of JD (Vijay) mentally. Amidst the goons who are getting confused with the strange behaviour of a same person, Arjun Das could be the key who finds out that both are the same person.

Before the start of the song “Polakattum Para Para”, Vijay Sethupathi says “Ungalku 2 nimusham time tharen, mudinja enna konnutu ungala kaapathikonga” (I will give you two minutes, Kill me and save yourself if you can) to Vijay which hints that killing the Bhavani in himself is the only way for JD to survive. The song which is meant for “Bhavani” describes “Vaathi” in midway as well. Edward Norton would shoot Tyler Durden in the climax of “Fight club” to save himself.

It is also notable that one of a poster that released earlier shows Vijay posing by having a book named as “Alter ego” alongside with him. The term “Alter ego” defines a person’s secondary or alternative personality. The poster also shows a book named as “16 person types”.

The much awaited teaser of “Master” released on youtube only make the fans to crave for the film. The 91 seconds long teaser promises a mass commercial action entertainer with a cat and mouse chase between Thalapathy Vijay nd Makkal Selvan Vijay Sethupathi. Starting the teaser by revealing the character name of Vijay, the teaser goes on to expose the roles of Malavika Mohanan, Shanthanu, Arjun Das, Gouri Kishan and others. Andrea and Master Mahendran were not seen in the teaser and are believed to be the surprise elements.

Check out some of the reactions on “Master” being influenced by fight club :