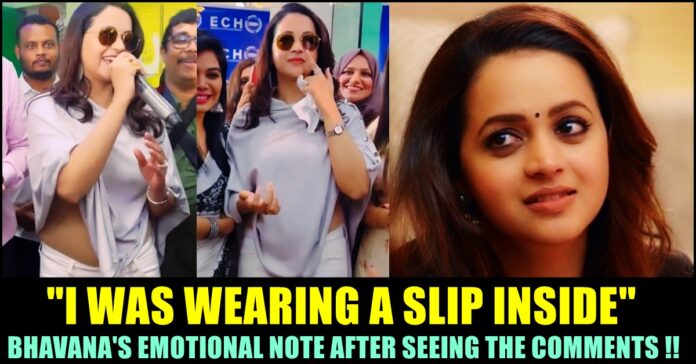 South Indian Actress Bhavana forced to justify the choice of her clothes after a group in social media made abusive comments against her for the attire she was wearing while attending an event in Dubai. The actress said that she was wearing a slip under her tops and expressed her displeasure over how people are trying to degrade her.

Through her post, Bhavana said that there are lot of people trying to send her back to the darkness, presumably referring to the ordeal she went through due to Malayalam actor Dileepkumar. The actress who is known among tamil audience for acting in films such as “Deepavali”, “Chithiram Pesuthadi” went to Dubai to receive the Golden Visa.

The post surfaced in her Instagram after a series of her pictures and videos from the event grabbed the attention of online users. In one of the clips that are doing rounds, she is seen dancing with her fans and it went viral. For the event, Bhavana had worn a loose white top (a poncho) over her pants and danced in an enthusiastic manner.

As soon as the video went viral, a section of online users started making derogatory comments against the actress. Many commented that the actress’s “skin” was seen under the top whenever she lifted her hands whereas others asked men to stay away from her or they have to face harassment cases.

Responding to the abusive comments, the actress came up with a post in her official Instagram handle where she enjoys 1.8 plus million fans. She wrote “Trying to live each day telling myself that everything will be alright, trying to keep away the sadness as I don’t want to hurt my loved ones, no matter what I did, I was hurt by bad words. I know there’s a lot of people out there trying to send me back into the dark. And I’m convinced thať’s how they find happiness. If that’s how you get happiness, I won’t stand in their ways”  in Malayalam.

The actress also attached an interview in which she explained that she was wearing a slip below the top.  Many users and celebrities came in to support the actress through their posts and Instagram influencer Aysha Marker house was one of them. She asked the abusers whether they expected to see a museum or DD1 channel if someone lift their hands. “”If one doesn’t wear a slip will one be arrested and hanged for it ? Are we in Afghanistan for it to be illegal” she asked.

BREAKING : Vijay Sethupathi’s Shocking Statement On The Fake News About Him !! He Totally Frustrated !!

Vijay Sethupathi, one of the very few actors who is not very active on social media, yesterday posted three back to back posts in...

On June 26, Chennai held its eighth annual LGBT pride parade to rally for equal rights and the dismissal of Section 377 of the...