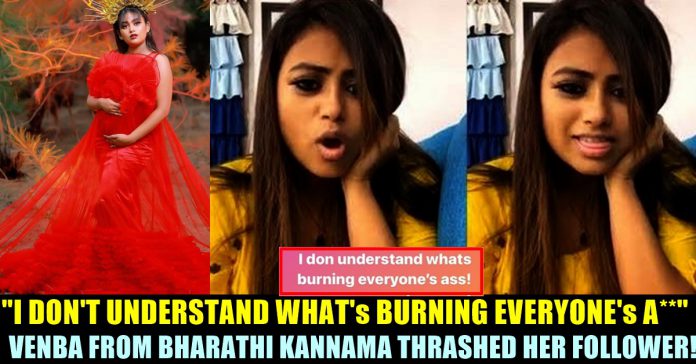 Farina Azad, was asked a question by a follower on not inviting a serial actress to her baby shower. She has also replied to the question that was asked to her. In a story, she has posted a follower’s comment and she has replied to it. However, in a story following it, she has uploaded a screenshot of the follower apologizing in the messages.

Farina Azad, is a serial actress acting predominantly in Tamil Television soaps. She is also a famous video jockey and a model. Farina has acted in serials like Thari and Nachiyarpuram. Her role as Venba in Bharathi Kannamma is very famous.

Farina Azad is quite active on Instagram. She actively posts pictures of her photoshoots during her pregnancy. Many people are showering the actress with their blessings and love. Few of them criticize the actress for showing her baby bumps in the picture. Nevertheless, the actress replies to all the hate comments and criticisms made of her.

In a recent post, the actress has been asked why she did not invite Kavya for her baby shower. The follower has asked so, as Kavya before resuming the role as Mullai in Pandiyan Stores after the death of Chitra, has acted in Bharathi Kannamma.

The follower has asked, “Why didn’t you invite Kavya for your baby shower? She has also acted in Bharathi Kannamma with you. After she left to Pandiyan Stores did you abandon her?”

To this Farina has replied, “When will you people stop talking? More than your concern we guys have lot of care and love with us”

Farina Azad has uploaded a story of a comment posted by a follower and given the reply to the comment. The follower has asked, “How many photoshoots during the pregnancy period as if you are the only one pregnant in this whole world.” Farina has given a reply to the comment telling its her job.

Following this story Farina has posted a story of the person apologizing to her in message and has captioned, ‘Finally some realisation dms.”

This Famous Celebrity To Enter The Bigg Boss House As Wildcard Entry??

With 6 days into the newly launched season of Kamal Haasan hosting Bigg Boss show, buzz about the 21st contestant who is going to...