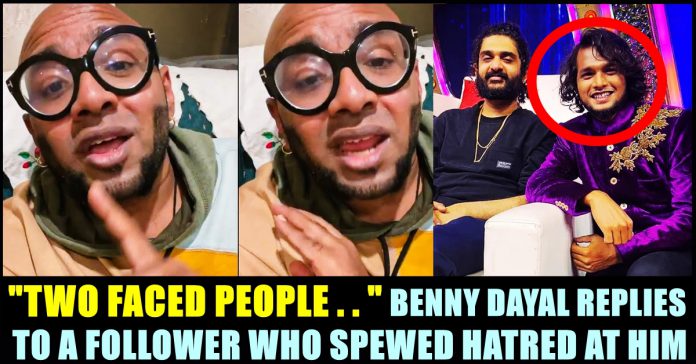 Benny Dhayal has been facing the after effects for participating in the Super Singer show as one of the judges. Ever since the announcement on the elimination of Sridar Sena surfaced, fans who are keenly watching the show, are blaming the channel, as well as the judges. Sridar garnered a huge reception among the television audience for his voice and for the way he sings in the singing competition. Irked over the negative comments that flooded in his social media spaces, seasoned playback singer Benny Dayal who acted as a judge for the show, announced that he is not going to participate in the upcoming seasons of the singing show as judge.

“I will no more be posting anything associated with Super Singer 8. I can’t take all the hate messages. Thank you for all the love you have shown me. I’m human after all. I’m done. Thank you. Won’t see you next season!” Benny wrote in a social media post to express his displeasure over the comments of the fans. “IM UNABLE TO EVEN POST ANYTHING ON INSTAGRAM. Any post i make here i get your hate messages. Might as well not do the show itself.” he further added.

On the special occasion of Onam day, the singer came up with a video to wish his followers with a caption saying “Happy Onam Sadhya with @hashbass and wonderfu food from @thatthalasserygirl”

Among the many wishes he received, a follower dropped a comment saying “Sorry to say this but how do you lie through your teeth. This week’s elimination was not a tough decision. It was very clear who performed poorly. And amazing how you guys have suddenly stopped giving scores because the audience complained that based on scores it was unfair to eliminate @aravindkarnee and @sridharsena. Why don’t you guys just come out in the open and say this is not competition anymore we have already selected the winner. This show is a disappointment to real talent and singers” to show her disagreement over the judgement of Benny in the show.

The user tagged some of the main names that are associated with the singing show. Replying to the comment, Benny replied wishing the user “Happy Onam” and went on to express his disappointment over people commenting about the show he hosts in his post which is about “Onam”.

Here’s the screen shot of his comment and Benny’s replies :

Further, Benny captured the screen shot of the commenter’s reply to his Onam post and said “THIS IS WHAT I CALL ATTENTION SEEKING AT ITS BEST. THIS PERSON HAD SO MUCH HATE TO GIVE
ON MY ONAM POST WHEN I WISHED HAPPY ONAM THE REPLY WAS GOLDEN! 2 FACED PEOPLE” in his story.

Previous articleRemember The Girl Who Thrashed A Cab Driver ?? She Got Trolled After Trying To Tie “Rakhi” To The Victim
Next articleSadhguru’s Tweet About Feminine & Fragrance On Raksha Bandhan Goes Viral!!