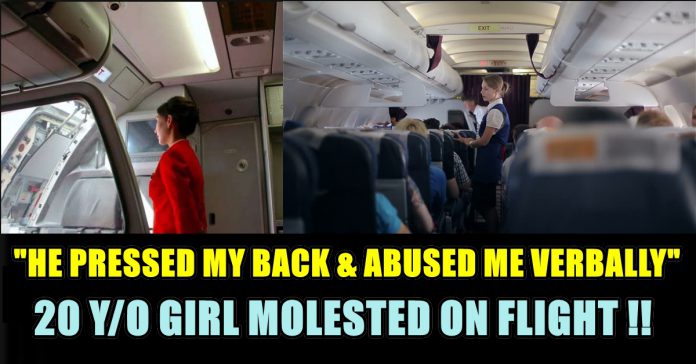 A 28-year-old passenger has been arrested for allegedly molesting a female flight attendant on board a Bengaluru-bound IndiGo plane before its departure from the Mumbai airport, a police official said today.

Raju Gangappa, a resident of Bengaluru, allegedly pressed the back of the 20-year-old flight attendant while he was passing by her and when she reprimanded him, he abused her, the official said giving details of incident which occurred on Tuesday.

She informed her seniors about the incident following which the person was offloaded along with his baggage, he said.

The official said he was handed over to the Central Industrial Security Force (CISF) officials and later taken into custody by the airport police.

Gangappa has been booked under IPC section 354 (assault or criminal force on woman with an intent to outrage her modesty), he said.

“The flyer pressed my back and when I retaliated, he abused me verbally. I informed the incident to my senior before the flyer was offloaded with his baggage,” TOI quoted the complaint written by the survivor.

The incident occurred on board flight 6E-825 which was set to depart Mumbai at 9:30 pm but was delayed by half an hour due to the process of arresting the accused. Soon after she was allegedly molested, the crew member approached the flight superintendent who in turn got in touch with the Central Industrial Security Force. The CISF detained Gangappa before handing him to jurisdictional police.

“He was handed over to the local police by the CISF officials and booked for molestation. He was produced in court on Wednesday,” a police officer told Mumbai Mirror.

According to reports, Gangappa was in Mumbai for business and was flying back.

Following his arrest, he was produced in a Mumbai court on Wednesday, which remanded him in police custody for a day, the official said. He will again be produced before a court Thursday, he added.

A probe was underway in the case, the officer said.

IndiGo did not respond to a query on the issue.