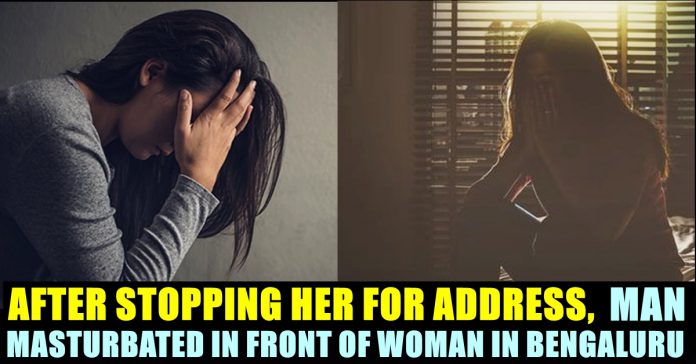 Despite the struggle caused by Coronavirus across the country, many felt grateful to the disease as the number of crimes reduced in the country since the pandemic. The number of crimes such as harassment against women, murders and theft cases reported in a less number comparing to normal days. Country India is under lockdown for more than 100 days, result of which many cases of domestic violence against women reported to Police officials. Now, people are slowly returning to normalcy it seems as horrific crime incidents are taking place in daily basis, across the country.

In this recent report, a 31 year old journalist has registered a complaint to police officers alleging that a man flashed his private part in front of her after stopping to her inquire about an address. She who lives in Bangalore had this most horrific experience on Saturday, according to reports.

The incident took place in Bengaluru’s Banaswadi locality at around 10 AM on Saturday. The victim was returning to her house after buying groceries. All of a sudden, a man in scooter wearing helmet and safety mask stopped by her and asked her to help him with an address. While explaining him about the directions to the address, she noticed one of his hands was going down and reportedly unzipped his pants.

After the incident, She went to Ramamurthy Nagar Police station and filed a legal complaint. The cops are currently verifying the CCTV footage to identify the culprit. The police have said that they have received leads and would trace the offender soon.

In Haryana’s Ambala district, a man was arrested under POCSO act for flashing at a minor girl on several occasion, earlier this year. He was accused for sexually harassing school girls in a regular interval. He was caught-red handed by a girl’s parents and they handed over him to the police only after thrashing him with the help of the public people.