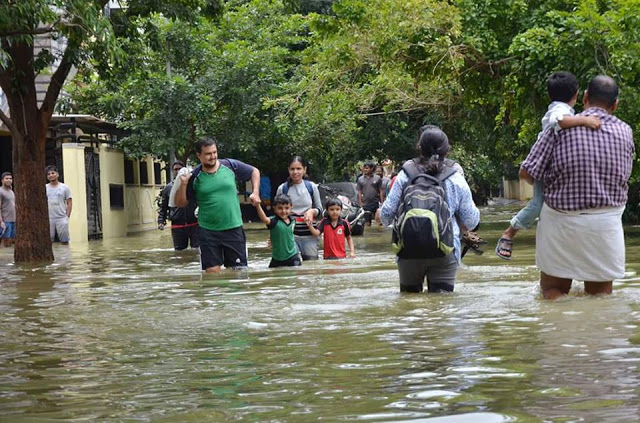 Water has entered 5oo houses. But water clogs are commonly found on all main roads. People are experiencing waist deep water levels. Especially Bennerghatta road, Bommanahalli circle and Silk Board Junction which are the most important routes taken for all IT companies. And traffic jam was at its worst stage. One batch of vehicles took 2 hours to cross a signal. As a security measure, electricity board has resorted to load-shedding and people are cautioned to switch off main switches to avoid short circuit.  Firemen warn that it could become dangerous as more rains are forecast and urge people to move out. Food, water, milk and biscuits are being distributed to the stranded. All the under passes are completely water logged.  Fire department has deployed boats to move people out of flooded areas in Kodichikkanahalli, but most are waiting it out in the that for water will recede.
Uprooting of more than 30 trees were reported from Rajkumar Road, Basavanagudi, Ragigudda, Jayanagar 9th Cross.

The K.R. Puram–Tin Factory junction and the down ramp to Old Madras Road from K.R. Puram flyover has been packed for many hours now.This disrupted traffic towards the IT corridor and Whitefield again.

Salem Railway Under Bridge (RUB) that had been posing a serious hurdle for traffic on ORR and continues to remain a concern, as it still remains inundated disrupting traffic flow on the crucial ORR.

Parts of Hongasandra and H.S.R. Layout were also flooded following incessant rains that have been lashing the city since Thursday night.
Not just these outer areas, many roads within the core city like Richmond Road, Platform Road near Mantri Mall, Pottery Road have also seen inundation leading to slow moving traffic.
Veerasandra Junction, Electronic city is one another place where overflowing of a lake has blocked road.
Over the past two days, the Bellandur lake in the southeastern part of the city has not only been overflowing but has started frothing.
As the local cops are trying to clear the clogged water drains, amusing as it may sound, some people engaged in catching fish in the overflowing lake water at 29th Main, BTM. Karnataka officer Abhishek Goyal tweeted photos.

In a span of four days, Bengaluru has recorded over 135 mm of rainfall, which happens to be about 30 mm more than its monthly rainfall in July. And the weather department has forecast more rain.
R. Hitendra, Additional Commissioner of police (Traffic), said that the incessant rains and inundation of crucial arterial roads had put the traffic in the city out of gears. “We, along with Fire and Emergency Services, have been trying to remove water from these inundated roads clearing them for traffic. But even after clearing water, we observe that the waterlogging has created large potholes and bad road stretches which have drastically brought down the traffic speeds on the city’s roads in the last one week,” he said.
Meanwhile, Mayor B.N. Manjunath Reddy is expected to visit the rain-affected areas in the city later today.