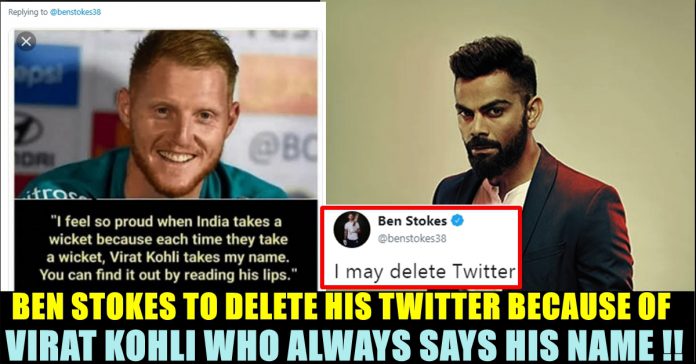 England all-rounder Ben Stokes on Sunday came out with a witty tweet regarding Virat Kohli’s north Indian curse word, saying the cricketer uses the phrase rather than his name. The 28-year-old also said that it used to be funny but it is not anymore. While Virat Kohli was busy captaining his team against Pakistan in a World Cup match at Manchester, Stokes tweeted about how he is tired of being mentioned in tweets which suggest that Kohli actually pronounces the English all-rounder’s name every time he is celebrating on the pitch. In his tweet he wrote “I may delete Twitter just so I don’t have to see another tweet reading “He’s saying Ben Stokes”(when he’s clearly not😆)in reply to a video of Virat saying you know what 🤦‍♂️🤦‍♂️it was funny the first 100,000 times.”

I may delete Twitter just so I don’t have to see another tweet reading “He’s saying Ben Stokes”(when he’s clearly not😆)in reply to a video of Virat saying you know what 🤦‍♂️🤦‍♂️it was funny the first 100,000 times.

The tweet soon went viral, and Twitter users flooded the replies with GIFs of Virat Kohli celebrating while mouthing the curse word.

Ben not so Stoked! 😅

You are mistaken. Here’s the proof. Watch carefully.. pic.twitter.com/t1dstf6eli

Ben stokes is not just name, it’s an emotion.

😂 he loves you very much.

Bhai, hold on. Wait for Ind vs Eng and then you can delete it.

Just in case, if anyone missed it the first 100,000 times pic.twitter.com/VBfpV9HoAz

Hahaha…someone finally told him I guess 🤣🤪

Earlier, Rohit Sharma and Virat powered India to post a total of 336/5 after sent in to bat first against Pakistan in the World Cup match at the Old Trafford in Manchester.

Defending the total, Indian bowling unit rattled the top-order of Pakistan as both Kuldeep Yadav and Hardik Pandya took two wickets each. The rain interrupted Pakistan’s innings when they were at 166/6. If the play doesn’t start, India will be declared victorious as Pakistan needed a par score of 252 and they are 86 runs short.

Previous articleMan Schooled Ganesh Venkatram About Conducting “Seemandham” !! Check How Ganesh Replied !!
Next articleFans Asking Sachin Tendulkar To Give Credits To Vijay Shankar !! Check Out Why !!

VJ Parvathy Replied To Those Who Body Shamed Her !!

Among enormous number of Indian cinema celebrities, Priyanka Chopra who is a well known across the country for her acting stint also expressed her...

With the India-Australia ODI series being more than a month away, wicket-keeper Mahendra Singh Dhoni was pictured trying his hand at tennis in his...