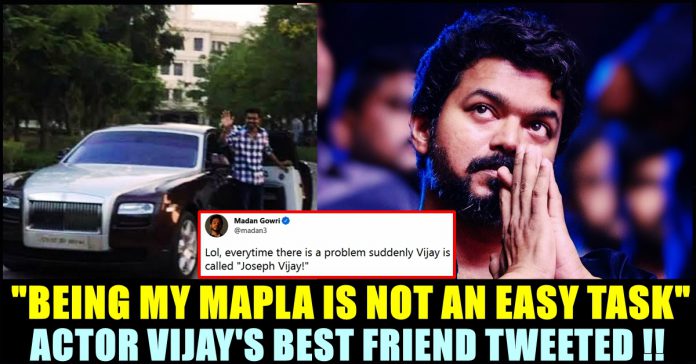 Several celebrities, fans and even politicians are reacting to the judgement of Madras High Court on the case regarding actor Vijay’s petition which sought tax exemption on his imported Rolls Royce car. To the actor’s petition which was filed during 2012, Judge Subramaniam of Madras high court came up with a statement criticizing the actor for hesitating to pay the tax which is mandatory. Reports on the judge’s statement caused several hashtags in the Internet which fans supporting and condemning him. Now, actor Vijay’s best friend Srinath who is known for acting in few films and directing “Vallavanukku Pullum Aayutham”, came up with a tweet supporting the former.

Srinath said that being his “Maapla” is not an easy task and his tweet garnered huge reception among the users of the micro blogging social media site. Judge Subramaniam of Madras high court imposed Rs. 1 lakh fine for actor Vijay who sought tax exemption on a luxurious car that got imported from foreign. It has been reported that the “Gilli” actor imported a Rolls Royce car from England in the year 2012. He was asked to pay entry tax by the Assistant Commissioner of Business Taxation. Followed by that, Vijay filed a petition in Madras high court in the year 2012, seeking exemption for the entry tax.

Reacting to the news and the furore it caused, Srinath wrote “Being mapla @actorvijay is not an easy task” in his tweet.

2/3 thread : #actorvijay
Judge Subramanian said the actor should respect the sentiments of lakhs of his fans who paid for his movie ticket. “It is only out of such money that the petitioner has purchased the ‘world's prestigious’ car for his personal usage,” the court said.

Lol, everytime there is a problem suddenly Vijay is called "Joseph Vijay!"

There is a vast difference between Tax Evasion and Tax Exemption.

There is always a ground for appeal. This order is not final !! Probability of this order getting quashed is very high.
Truth will always triumph ! #ThalapathyVijay @actorvijay ❤️

We should not forget the help. For one court matter we cannot assassinate his good deeds.

Previous articleActress Slammed Media For Ruining Vijay’s Character !!
Next articleGayathri Raguramm Trolled Vijay Sethupathi After Watching This Video Of Him

Comedy actor Balaji who has been appearing in Vijay TV's reality shows as a judge, made a complaint against SI Manoj Kumar and said...

A 19-year-old girl, who went missing early on Friday morning, was found dead with stab injury wounds in Poosarippatti near Pollachi town in Coimbatore...