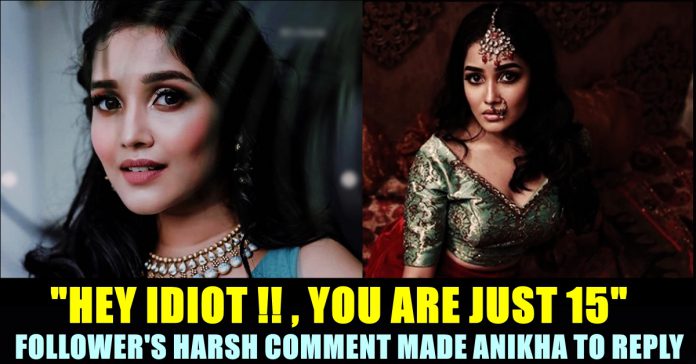 Anikha Surendran, 15 year old child artist who is known among Tamil audience for her appearance in films like “Viswasam”, “Ennai Arinthaal”, ” Naanum Rowdy Thaan” is currently busy posting pictures of herself in social media platforms from the photoshoots she is conducting. With 9 lakh 74 thousand followers, Anikha has posted 294 posts in her official Instagram account. The 15 year old actress is expected to play lead in near future and is already being compared with the looks of “Lady Superstar” Nayanthara.

With her unique attires and International level makeovers, Anikha is competing with the top heroines of Indian film industry. She is constantly receiving 2 Lakh plus likes for every of her post through which is on par with some of the top actresses. Read : “She Looks Exactly Like Nayanthara” -Netizens On Seeing This Young Upcoming Actress !!

Among the large amount of love she is receiving for the way she is carrying herself, a little amount of hatred also sliding her way. A number of followers can be seen involved in “moral policing” the actress in the comment section of her posts. Referring to her age, many followers of Anikha has asked her to act like a child instead of acting as a heroine.

One of such user named as “Suria797”, made a mean comment on one of the recent posts of Anikha. He who called her as “idiot”, asked her not to think that she is already matured. He who reminded her that she is just 15, asked her to stop posting pictures like that. He further asked her to behave according to her age.

“Hey idiot, don’t think you are too matured. You are just 15. Stop posting photos like this. Behave according to your age” read the comment of Suria 797. Here’s the screenshot of his comment :

Anikha who saw this comment, immediately came up with a kickass reply to the Instagram user. “It is my Instagram and my body, I can do wherever the hell I want” read the reply of her.

This response from the young actress received many accolades from her fans and followers. On the work front, Anikha who acted as the younger version of Jayalalithaa in “Queen” web series, is expected to seen in Vijay Sethupathi’s “Maamanithan”.