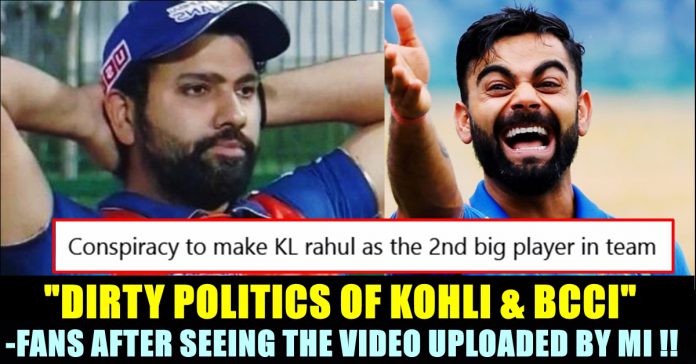 Board of control for cricket in India, announced the squad for the upcoming Australian tour on Monday. Names of Varun Chakravarty, T Natarajan, Tyagi, Mohammed Siraj took place in the squad which made fans happy. The tour comprises four tests, three one day international matches and three t 20 matches. However, few decisions of BCCI raised the eyebrows cricket experts and fans. Rohit Sharma, the current vice-captain of the team was not named in the squad and KL Rahul was included in the test squad despite of his poor performance in the last few tests he played.

Check out the squad for the three formats :

The BCCI Medical Team will continue to monitor the progress of Rohit Sharma and Ishant Sharma. #AUSvIND

Rohit Sharma missed playing last two last two IPL games for his team Mumbai Indians due to hamstring injury. Kieron Pollard is captaining the team. Rohit had suffered the hamstring injury in the match against Kings XI Punjab on October 18 which they had lost after playing out 2 Super Overs in Dubai. While he was expected to return to the team soon, reports emerged saying that he is likely to get ruled out from the ongoing tournament due to the injury.

Now, BCCI’s decision of not including him in the tournament, surprised the fans. Meanwhile, official twitter handle of Mumbai Indians, after seeing the squad announced by BCCI, came up with a video which showed Rohit performing in the nets. He was seen hitting the nets in Abu Dhabi before their team’s match against RCB on Wednesday.

Despite of BCCI’s statement which said that the fitness of Rohit Sharma and Ishant Sharma will be monitored, the news didn’t o well with the fans of the MI skipper. On seeing Rhul being named as the vice captain, they started slamming the board for not including his name in the squad.

Virat's insecurity with Rohit 🤷🏻‍♂️
I'm 100% sure Rohit is not that much unfit that he won't be able to fully recover before Aus tour.

This is just bad politics in Indian cricket. Surya Kumar Yadav is still not selected either 🤷🏻‍♂️

Again big thanks for this now i know they are playing dirty politics but they can't play for a long a bad time is started of Kohli Shastri ganguly and others selection commission.

What's happening, why Hitman isn't there in Indian squad if he's well settled to play? Even he's not ruled out of IPL, without him it's going to be too much difficult for our team, his record against Aussies speaks for him.
What's the truth? 😕

Comment your views on this exclusion of Rohit from the team !!

Previous articleVarun Chakravarty Requests For A Meeting With Vijay To This Actor !! WATCH
Next articleMarlon Samuels Slammed Ben Stokes & Dragged His Family For A Comment He Made !!