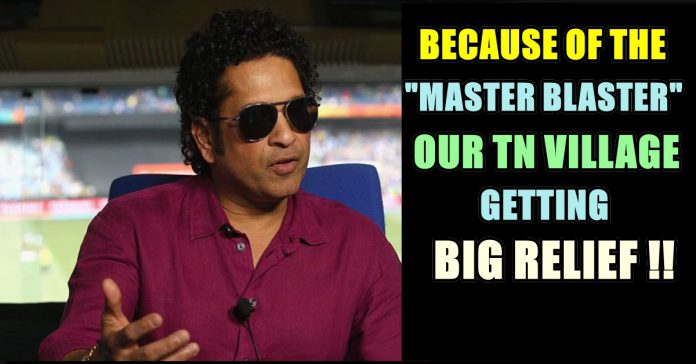 A 500-metre road is being laid in a village in Perambalur district at a cost of Rs 21.70-lakh thanks to retired cricketer and former Rajya Sabha MP, Sachin Tendulkar.

The batting maestro whose tenure as a nominated member of the Upper House ended in April, had given consent to use funds from his Member of Parliament Local Area Development Scheme (MPLADS) for the project during his tenure. Perambalur district collector V Santha told TOI that it was the collector of Nashik, B Radhakrishnan, who was instrumental in getting Tendulkar’s consent for granting funds to lay the road at Elambalur village. She said that the Nashik collector, who hailed from Perambalur district, was informed about the need of a road at Elambalur. This was conveyed to Tendulkar before his tenure as Rajya Sabha MP ended. “We were asked to send a proposal letter to Tendulkar regarding this. We sent it and he immediately gave his consent before his tenure was over,” Santha told TOI.

She added that since the project had to be executed within 75 days, the full-fledged road laying process was currently on. Nominated members of the Lok Sabha and Rajya Sabha have the option of selecting works for implementation anywhere in the country through MPLADS.

Previous articleFan Asked Kamal What Will Be His Reaction If Vijay Enters Politics !! : Kamal’s Reply Was An Awestruck !!
Next articleMamathi Chaari’s Elimination Saddened This Famous Kollywood Director To The Extreme !! He Mourns !!

While responding to requests that are being made by poor students, farmers and struggling graduates, Sonu Sood also grabbed headlines for his witty replies...

Conducting question and answer session with fans and followers when they are feeling bored is something common among the cinema celebrities. Most of the...

Tamil Actress Trolled PETA By Wishing Them On Bakrid Day !!

Bakrid or Eid-Al-Adha, one of the most important festivals celebrated by Muslims all over the world, falls on the 21st of July this year....