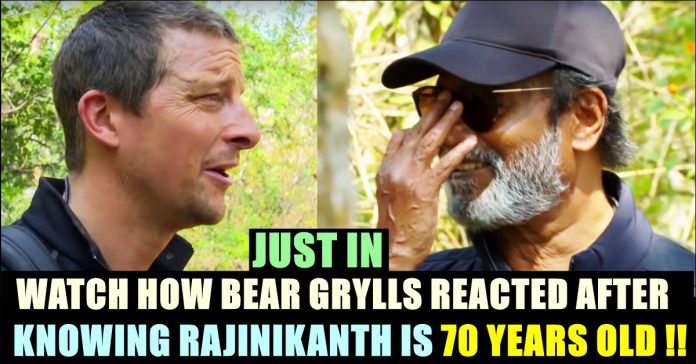 Bear Grylls Said That Rajinikanth Is An Inspiration !! Check How Internet Is Reacting

The most awaited sneak peek video of Superstar Rajinikanth’s episode of Man Vs Wild released on Youtube and it is trending in entire internet. The video shows the glimpses of Rajinikanth spending time with Bear Grylls the forests around Mysore, Karnataka. As soon as getting released, the sneak peek reached nearly 4 lakh views and more than fifty thousand likes.

When Bear asks Rajinikanth about how his acting career was happened, he says that he studied in Madras film institute before getting identified by K Balachander, a veteran filmmaker. “He selected me and changed my name. Actually my name is Shivaji Rao Gaekwad” Rajinikanth says to Bear Grylls.

When Bear Grylls asks Rajinikanth how he deals the fame and family, the Superstar actor answers by saying that he never got that fame into his mind. He says that he would forget he is Rajinikanth as soon as finishing acting. After that Rajinikanth and Bear Grylls were seen climbing a hill with the help of role. After finished reaching the top, Rajinikanth with heavy breathing says “I am doing real adventures. I have never done this in my life before. Super Thanks”

When Rajinikanth is talking to the crew, Bear Grylls who was seen tying the shoelace of Rajinikanth, gets up and says “You are fit. Do you know that ?” Do you mind if I ask you how old you are ?” to which Rajinikanth replies by saying “I am seventy”. Bear Grylls, after knowing that the actor is seventy years old , says that Rajinikanth is an inspiration.

As soon as the video released, fans of the actor couldn’t keep calm on seeing their favourite actor doing adventures. Check out some of their reactions below :

Superb Thalaivaaà 😍😍😍 at this age you're FIT & an inspiration to all genre's 🔥🔥❤❤👌👌
Only Thalaivar The 'legend things'.#ThalaivaOnDiscovery #ManVsWild #SuperStar #Rajinikanth . pic.twitter.com/QVGFAzER6L

Really You Are An Inspiration #Thalaivar #Superstar #Rajinikanth #ThalaivaOnDiscovery #ManvsWild

Guess, i also will struggle to cross that metal bridge with narrow space for steps.#ThalaivaOnDiscovery
You're an inspiration #Rajinikanth

The show is scheduled to stream on the 23rd of March. Comment your views on this sneak peek video !!

Previous articleCab Driver Cried In Front Of “Moodar Koodam” Naveen !! Check What He Did !!
Next articleJUST IN : Amala Paul’s Wedding Pictures Leaked ??

Actor Got Trolled For His Comment On Malavika Sharma’s Video!!

Audio Recording Of An Assistant Professor “Approaching” A Girl Student Got Leaked!!

Audio recording of an assistant professor "approaching" a girl student to visit his home for no exact reason got leaked in internet with public...