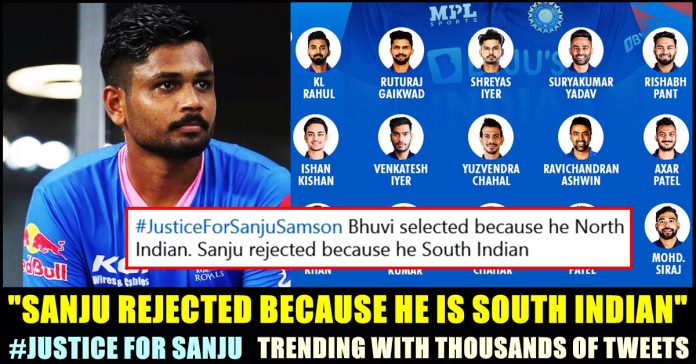 After BCCI announced the squad for the upcoming New zealand series, fans started trending “Justice for Sanju Samson” in the micro blogging social media site, demanding the team management to back him like they are backing Bhuvaneshwar Kumar. Pointing out his performance in the recent IPL tournament, a number of fans went on to accuse BCCI of denying Sanju a chance just because he belong to South region of the country.

How excited are you for the home series? #INDvNZ pic.twitter.com/wGCe0gBbL2

Sanju Samson who is expected to make a permanent place in the Indian team, missed to make a place in the recently announced squad. He is currently leading Rajasthan Royals and is expected to transferred to another team for a huge price in the mega auction. In the 14th edition of the IPL tournament, Rajasthan failed to perform as a team but Sanju had a decent tournament. He scored 484 runs in 14 games, averaging an impressive 40.33.

On seeing his name missing in the squad, a number of online users got upset and started trending “Justice for Sanju Samson”. “Bhuvi selected because he North Indian. Sanju rejected because he South Indian” a follower wrote in his tweet whereas another one said “The Way You have backed Rishabh, why BCCI Is unable to back Samson?”

He was also useless like sanju but dhoni backed him
Now he should also back sanju in t20Is but he is biased towards mumbai players #JusticeForSanjuSamson pic.twitter.com/6Mw56gRa4W

So as usual Sanju is dropped🙂 Man literally had his best IPL season🥲
Sanju started playing IPL at the age of 18 also won the emerging player award. He is now 26!
If groomed earlier he could hv been our no4.
Don't want him to be a wasted talent🥺#JusticeForSanjuSamson pic.twitter.com/eRi3Vuvsll

Dear @IamSanjuSamson please move to Srilanka and play for them,you will be welcomed with both hands,we will cheer for you.Only legends like Sangakara know your value. @BCCI @chetans1987 #JusticeForSanjuSamson pic.twitter.com/drzgHDbzuK

Sanju Samson has 3 100 in the IPL and also he is performing consistently but what happened to the selectors, why is he getting ignored ? #JusticeForSanjuSamson pic.twitter.com/CaV2vdILvr

I don't know why bcci isn't backing or picking sanju samson he has performed consitantly in ipl and smat they say that he is inconsistent but what about now? Why he is being ignored #justiceforsanjusamson pic.twitter.com/unAUAhKZtW

One of the most underrated and unlucky cricketer is Sanju Samson 💔 He isn't getting chances even after performing consistently in IPL and SMAT #JusticeForSanjuSamson pic.twitter.com/7lDjORBIDT