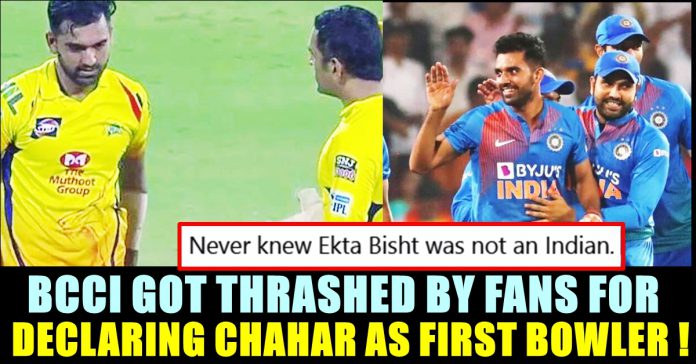 For dubbing Deepak Chahar as the first Indian to take hatrick in Twenty20 Internationals, The Board of control for cricket in India is facing the wrath of social users. The reason behind the anger is the fact that Ekta Bisht, 33 year old woman cricketer of Team India has accomplished the milestone in 2012 itself against Sri lanka.

“@deepak_chahar9 today became the first Indian to pick up a hat-trick in T20Is 🙌👏” read the tweet of BCCI. Check out their post below :

.@deepak_chahar9 today became the first Indian to pick up a hat-trick in T20Is 🙌👏 pic.twitter.com/qNctKUVgmF

On seeing this post, many of the followers of BCCI fumed at the official twitter account for not considering women’s cricket. On third October 2012, Bisht took a hat-trick as India outplayed during the match of the ICC World Women Twenty20 played in Colombo, Sri Lanka. India has restricted Sri Lanka to a modest 100 for eight after Bisht claimed a hat-trick in the last over. Bisht who is a prominent player of the team, was a part of the Indian team to reach the final of the 2017 Women’s Cricket World Cup where the team lost to England by nine runs.

Check out some of the reactions BCCI is receiving :

Deepak Chahar is the first Indian to take a hat-trick in Men’s T20Is.

#EktaBisht (vs Sri Lanka in 2012) is the first Indian to pick up a hat-trick in T20Is.
U’ve simply forgot it as she is a woman and it took 7 years to touch it by a man.#EktaBisht @deepak_chahar9 @BCCIWomen @BCCI https://t.co/tfMLlwLEa3

. @BCCI sad that the your stats forgot that it was Ekta Bisht who took the first hat- trick for India. @deepak_chahar9 is the first Indian (man) to take it.

Before posting check the data or deliberately you forget Ekta Bisht as she is a WOMAN who was first Indian to pick up a hat-trick in 2012 .

Deepak Chahar who hails from Chennai Super Kings impressed the selectors and fans through his performance in the Bangladesh tour and is highly expected to get a place in the squad of upcoming T20 world cup tournament.

What do you think on this blunder made by BCCI ?? Comment your views below !!

Previous articleChinmayi Replies To Girl Who Refused Her Help !!
Next articleFollower Commented On This Bigg Boss Celebrity’s Makeup !! Check Her Reply !!

We are less than 50 days away from the year 2020, the year in which Dr.APJ Abdul Kalam wished India to become a developed...

Siddarth, a 21-year-old engineering student from Tamil Nadu was arrested for blackmailing her girlfriend to install a spy camera in her hostel washroom. He...