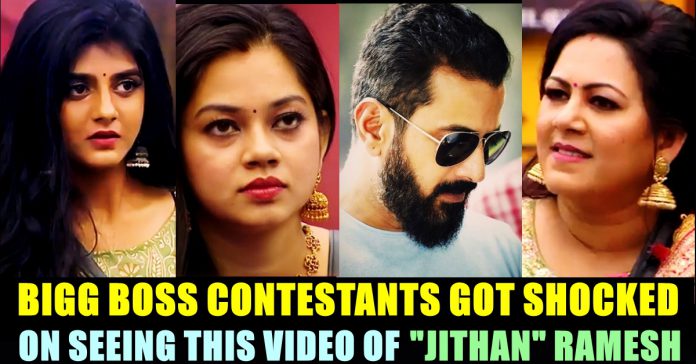 As soon as completing his Bigg Boss stint, Jithan Ramesh became super active in social media platforms and has been updating about his upcoming projects to his fans and followers. After getting evicted on the 69th day of the show, Jithan uploaded the posted of one of his future projects named “Miratchi” in his official Instagram handle.

Ramesh is widely known among mainstream audience for acting in a supernatural thriller film “Jithan”. After entering the house, he performed the tasks well and wanted to avoid getting the unwanted attention of being a son of a renowned producer. This attitude of the actor went well with the audience which made him to stay inside the house for 68 long days. He won many hearts during his Bigg Boss stint and is currently busy working on his upcoming projects.

Most recently, Ramesh uploaded a video of himself practicing dance in a dance studio with a number of dancers. He who displayed his effortless dancing skills through the video, uploaded it with a caption saying “FORGET YOUR TROUBLES AND DANCE ‘”

As soon as witnessing the video, his Bigg Boss housemates assembled in the comment section to express their admiration towards the dance of the 38 year old. Somshekar who called Ramesh as “Master” asked him to teach him dance whereas Gabriella and Ajeedh dropped fire emojis. Archana chandhoke wrote “Brooooooo…. burning the floorrrr”

What stood top among all the comments is Anitha Samoath’s. She said that he refused to dance in the wake up songs of Bigg Boss show, despite of his immense dancing skill. “Ivlo theiryudhu..wake up song Ku matum adave matinga” read her comment.

Check out the screenshot of their comments below :