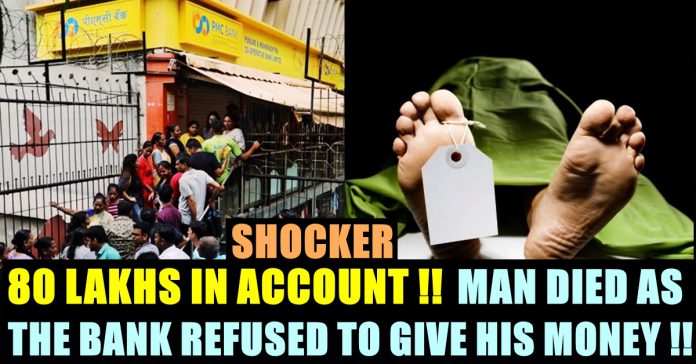 Despite of having 80 Lakhs Rupees of hard earned money in his bank account, a 83 year old man died of heart attack due to lack of money for his operation. The Punjab and Maharashtra cooperative bank has its branch in Delhi, Mumbai, Gujarat, Karnataka.

Last month, the RBI restricted the activities of the PMC Bank for six months and asked it not to grant or renew any loans and advances, make any investment or incur any liability, including borrowing of funds and acceptance of fresh deposits after an alleged fraud of Rs. 4,355 crore scam came to light.

Two days ago, an account holder of the PMC Bank, who had Rs 90 lakh deposited in the bank, died of a cardiac arrest after participating in a protest. A Mumbai-based doctor, who was a PMC Bank customer, committed suicide on October 16. Nivedita Bijlani, 39, committed suicide by taking sleeping pills.

Now 80 year old Muralidhar Darra, a Punjab and Maharashtra Cooperative (PMC) Bank account holder, died on Friday afternoon after suffering a heart attack at his Mulund residence in Mumbai. This is the fourth death reported in the city of an account holder in the scam-hit bank since October 15. Dhara had as much as Rs 80 lakh in deposits with the PMC Bank but could not withdraw the money due to the RBI curbs.

Muralidhar Dharra’s son Prem Darra told India Today TV that his father died because he couldn’t withdraw his money from his PMC Bank account for heart surgery. He added his father was unwell for a long time and that doctors had asked him for bypass surgery. However, he could not withdraw money after the Reserve Bank of India put restrictions on cash withdrawal from the bank.

He said that he informed Muralidhar that there was no money for his treatment, resulting in his death. “He understood, of course. His next question was how was I going to take care of the family…” he said.

“Before telling him, I asked everyone, all of my friends and neighbours, everyone I knew, for a loan. All of them have accounts at PMC Bank, so no one had money,” Prem added.

“The PMC Bank is responsible for my father’s death. They conspired and planned to cheat us off our hard earned money,” said Prem. Under the RBI directions, exceptions can be made for medical emergencies, but it is not known immediately whether the bank refused a request from the family. The RBI had initially put a cap of Rs 1,000 on the deposit withdrawals and upped it to Rs 40,000 in three moves.

Helpless PMC depositors have been protesting across the country for getting their money back ever since the bank was placed under restrictions.

This Actor Hilariously Trolled This Online User Who Tried To Troll Him !! Check Out !!

Actor Siddharth who is not at all satisfied with the past four years ruling of our Prime Minister involved in verbal spat with the...