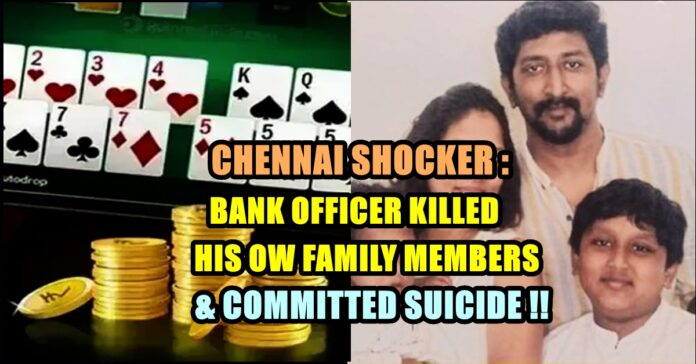 A socking report about a Chennai based bank officer committing syuicide after killing his own family members due to the excess amount of debt that caused by his habit of playing “Online Rummy” has created huge outrage among the public. Family picture of the Bank official is being circulated in the online platforms with users of it venting out their emotions by criticizing those who are getting addicted to online games.

Manikandan was living with his wife Thara and two children Tharan and Thagan in an apartment that is located in Perungudi which located near Chennai. Manikandan, native of whom is Coimbatore, was working in the Chennai branch of a multinational company that has its head office in London.

Manikandan bought Rs. 1 crore as debt from his friends alone and couldn’t pay them back due to his habit of losing money in online rummy. While his friends forced him to pay their money back, Manikandan’s wife Thara warned him about the bad situation of their family. The duo often involved in heated arguments regarding the same, says reports.

On 1st of January, Mani kandan who lost his temper, attacked his wife with a cricket bat. Thara was found spot dead, according to Polimer news channel. Manikandan went on to kill his 10 years old son Tharan by strangling and 1 year old son Thagan by pushing a cloth against him to make him stop breathing. After killing all the three members, Mani kandan decided to end his life and hanged himself in the kitchen.

Mani kandan’s friend was trying to contact him for a long time and the security of the apartment also rang to his phone. On 2nd of January, they went to the seventh floor where Manikandan was living and found the door was locked from inside but the fan swinging. They informed the police after there was no response for a long time. Police officials who arrived the spot immediately, broke the door and found the family members dead.

Police officials reported that there was lot of empty alcohol bottles were found in the house of Manikandan and said that he was addicted to online rummy game after searching his phone. Investigations are currently underway about why Manikandan stopped being regular to his job and whether he was addicted to the online gambling or not.

Previous articleShruti Haasan’s Fitting Reply To A Follower Who Questioned About Her Relationships !! WATCH
Next articleMan Arrested For Sexually Harassing A 15 Year Old Minor !! Netizens Blamed The Victim !!

Celebrities and TV stars getting marriage proposals from fans is common but have you ever witnessed a guy proposing his favourite female celebrity by...

After going through a lot of trouble for acting in the widely watched court room drama "Jai bhim", actor Suriya landed in trouble again...