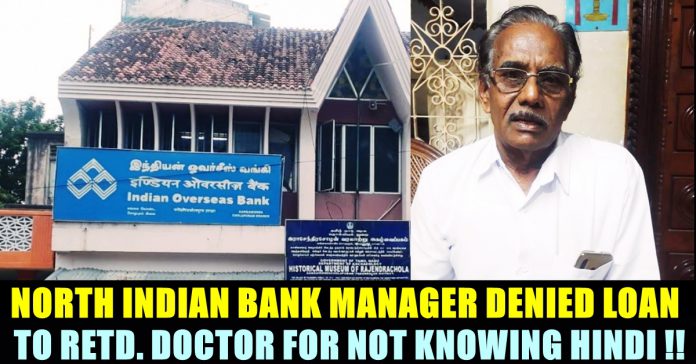 Manager of Indian Overseas Bank denied loan to a retired doctor when he approached the bank seeking loan to build a house. The manager who reportedly claimed that he is from Maharashtra, without considering the documents produced by the retired doctor, denied loan for him after knowing that he don’t know Hindi language. Disturbed by the attitude of the Bank manager, retired doctor C. Balasubramaniam has served a legal notice to him, seeking compensation. He demanded Rs.1 Lakh as compensation for the mental stress he has undergone.

C. Balasubramanian has been working as a doctor for more than 25 years in various Government hospitals in Tamilnadu. Before retiring, the 76 year old worked in a Government hospital in Ariyalur as chief doctor. To build a house in his land near Jayam kondan bus stand, Balasubramanian approached Indian overseas bank located in Gangai konda Chozhapuram. He reached the particular bank as he was maintaining an account there for a long time.But he got extremely dejected after meeting Vishal Kamble, a North India based bank manager working for the bank.

“Do you know Hindi?” he asked me. I answered by saying that I can communicate with him in English. “This is only language problem” he replied. When I said that I can explain everything in English, he said “Sorry sir, I can’t help you”. He abruptly denied sanctioning loan for me. I am not bothered about the loan amount being denied to me. But the way he behaved. “I am from Maharashtra. I know Hindi. Do you know ?” he said.” Retired doctor Balasubramanian told the media.

“The manager also told me that my land documents were in Tamil and he could not check them. I was very hurt by his treatment. I am a senior citizen and a 15 year old account holder, I don’t deserve being treated this way” C Balasubramanian told the media.

Despite of having all the documents that is required to get a loan, Balasubramaniam was denied loan just because he doesn’t know how to speak Hindi language. After the incident, doctor called the personal number of the Bank manager so many times. Vishal Kamble didn’t answer. Hurted by the way he got treated, Balasubramaniam sent a notice seeking Rs. 1 Lakh as compensation for the depression he went through.

The notice which was sent through registered post, stated that the denial of loan for not knowing Hindi could be termed as deficiency in service. The notice said that if the compensation is not paid, the Ariyalur district consumer court would be moved. A copy of the notice has been sent to the chief grievance redressal officer of the bank.

Local residents said that this is not the first time Vishal treated people who doesn’t know Hindi this way. They said that Vishal rarely interacted with local customers whereas the assistant Bank manager handled most of them.