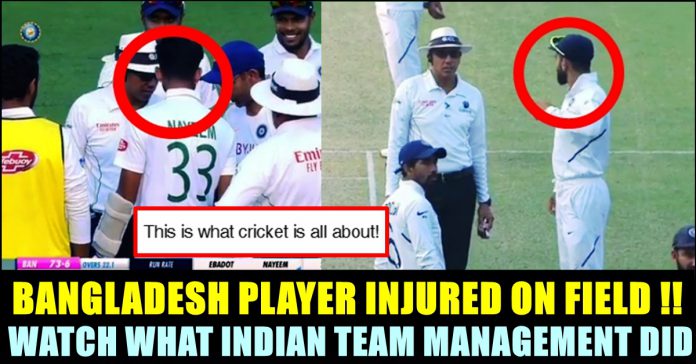 The match between India and Bangladesh saw a kind gesture from the management of Indian cricket team. Indian fast bowling trio of Ishant Sharma, Umesh Yadav and Mohammed Shami wreaked havoc on Bangladesh in the first two sessions and bundled them out for 106 runs in the first innings. Ishant Sharma leading India’s domination with the ball claimed his 10th five-wicket haul in Test cricket. Ishant picked up three wickets, while Mohammed Shami claimed one wicket in the second session.

Rohit Sharma unbeaten on 13, while Cheteshwar Pujara is playing on 7 as India reach 35/1 at tea on Day 1 of the historic day-night Test at Eden Gardens in Kolkata. Mayank Agarwal was the only wicket to fall for India as he was dismissed by Al-Amin Hossain for 14.

Meanwhile while Bangladesh’s batting, tailender Nayeem Hasan was hit on the helmet by a bouncer from Mohammed Shami. As soon as the incident happened, the Indian cricket team rushed to the batsman, and called the physios to come to his aid. The physio from the Indian camp, Nitin Patel, was the first to reach the player and he started tending to him.

Later, Bangladesh physio also joined the player in the middle. With Liton Das already substituted by Mehidy Hasan due to concussion earlier, Nayeem decided to stay on and bat. The official social media account of Indian team shared the video proudly with a caption saying “Bangladesh player in trouble? No worries – #TeamIndia physio to the rescue”

Bangladesh player in trouble? No worries – #TeamIndia physio to the rescue #SpiritOfCricket #PinkBallTest

This gesture from the Indian cricket team, lauded by the netizens. They started sharing the video with various captions which appreciated the team management for its instant reaction. Check out some of them here :

Team India physio jumps in within seconds of Nayeem getting hit on the helmet.

It happens in football all the time. Welcome to humanity, after all seems like you guys are doing it for the first time

This is what cricket is all about!

After India came out to bat, Nayeem did not return to the field as he was replaced by Taijul Islam due to concussion. It is the first in history that a team had to make two concussion substitutes.

What do you think on this gesture from Team India ?? Comment your views below !!

Previous articleIs This Nayanthara ?? Oldest Video Of Her Goes Viral !!
Next articleSanju Samson’s Single Tweet After His Omission From Indian Team Says Lot !!

Pakistan Official Tried To Mock India !! Indian Fans Thrashed Them In Their Own Way !!

Today, India and Pakistan are playing against each other in UAE for Asia Cup and both the countries are praying hard to get victory. Just...