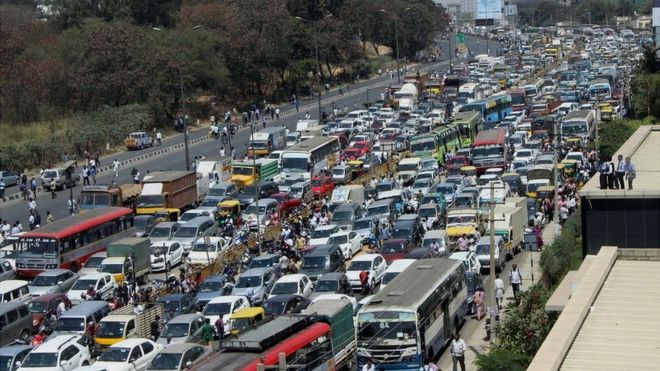 Bangalore,  the silicon valley of India believes that prevention is better than cure. The city does not want to be another city just like Delhi, highly polluted with smog due to emission of harmful gases , from various sources like factories and automobiles.

In order to protect the city, government has decided to launch a campaign called called ‘less traffic day’, to minimise the number of private vehicles plying on the road, as per a report by Sandeep Moudgal in the Times of India. “We already have 64 lakh private vehicles on the road and would like to avoid a smog situation, as in Delhi, in Bengaluru. While we are not banning private vehicles on that day, we will try to create an awareness among Bengalureans to utilise public transport or hire yellow board vehicles to avoid pollution in the city,” Transport minister HM Revanna told ToI.

Bengaluru has 64.36 lakh registered vehicles under the non-transport category, of which 49.42 lakh are two-wheelers and there are a total of 71 lakh vehicles in the city.

The initiative will be brought into effect from february 2018, and the campaign will be active on second Sunday of every month. “We are not banning private vehicles that day, but we will try to create an awareness among Bengalureans to utilise public transport or hire yellow board vehicles to bring down pollution,” he said.

Reports say that already a round of meetings was held in which authorities from the transport department, pollution controol board and traffic police participated. Another round of talks will be held to come upwith final decisions regarding the inititative.

As the residents of Chennai are already involved in the process of coping the Chennai’s very best friend , The Summer, abruptly Rain comes...