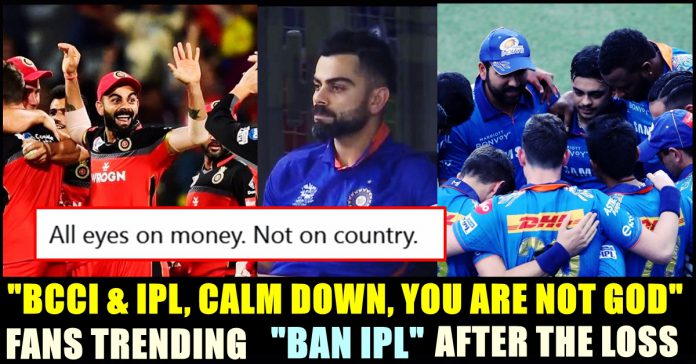 As soon as team India lost the opportunity to qualify for the next stage of the ongoing T20 tournament, fans started expressing their angst in every possible way. Hundreds of fans who felt that players of India are fully concentrated on the cash rich IPL tournament, started trending “Ban IPL” hashtag in the micro blogging social media platform. Video of a fan schooling why BCCI & IPL needs to calm down after the loss is going viral across the social media platforms.

Check out some of the other reactions under the hashtag :

It's all about "money", not "Country"#BanIPL

All eyes on money. Not on country. pic.twitter.com/f8fLUquHEx

Indian media shows their players but in actually they are jackass #BanIPL pic.twitter.com/l5sq1i7vmM

Situation in next match

Still we are depending on a team(afghanistan) who dont even have a country to go back home. No Money

Meanwhile other teams lining up to play against India to win and to increase their NRR 💥#BanIPL #Mauka_Mauka #harbhajansingh #Shame
Congratulations India pic.twitter.com/G16PRNwvWk

Actress Aishwarya Rajesh reacted to the assault case committed by an Under Driver through her official twitter handle. The actress said that such idiots...