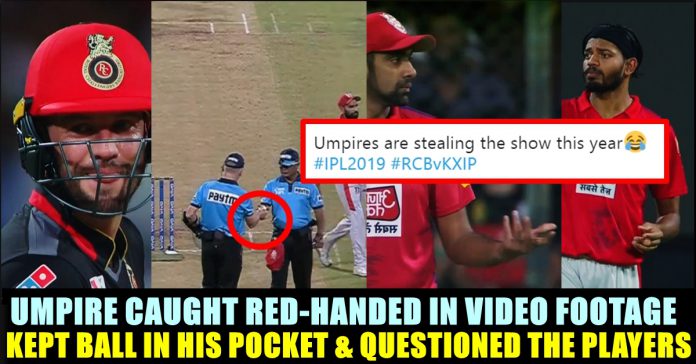 In an incident that had everyone puzzled, the ball went missing during the game Wednesday between Royal Challengers Bangalore and Kings XI Punjab. That happened after a batsman hit it out of the stadium, and the ball was briefly ‘lost’ after the umpire put it in his pocket and forgot.

A timeout was called after 14th over during the RCB’s inning, but after the timeout, the ball was nowhere to be found. KXIP bowler Ankit Rajpoot who was set to bowl was baffled as he tried to find the ball. He asked all his teammates and the umpires, but there was no trace of the ball.

There have been instances when ball has been lost in the crowd during a cricket match after a batsman hits a six. But yesterday, the ball for lost for real and that too because of umpire. This funny incident occurred during IPL 2019 encounter between RCB and KXIP. A timeout was called after 14th over of RCB’s batting, and after the timeout the ball was missing from the ground.

When KXIP bowler Ankit Rajpoot went to bowl, he could not find the ball. He asked about it to all the teammates, skipper Ashwin and also the umpire and there was no trace of the ball.

The ground staff was called with a box of balls but then the recording was checked and it was found that on-field umpire Chettithody Shamshuddin was the one who had the ball before timeout. Soon, the umpire also realised that the ball was in his pocket.

Before the time out, Murugan Ashwin handed over the ball to on-field umpire Bruce Oxenford who then gave it to Chettithody Shamshuddin but the latter forgot it. Have a look at the funniest video here :

This incident trended on Internet and received hilarious reactions from the netizens. Check out some of them here :

New ball is taken, not because batsmen hit it out of the ground, but because umpire kept it in the pocket and forgot.!! 😀😂 #CricbuzzLIVE #RCBvKXIP

Umpire kept the ball in his pocket and asked for another ball.
That was some scene 🤣#RCBvKXIP #VIVOIPL

This is something I have seen for the first time…. the game was held up because the umpire forgot that the ball was in his pocket! 😆😆#RCBvKXIP #IPL2019

Gully cricket at its best!

Umpires are stealing the show this year😂 #IPL2019 #RCBvKXIP https://t.co/7yiRbbWkTw

Would they cut Umpire’s fee tonight ? No

Would they cut Umpire’s fee tonight ? No

What do you think on this bizarre moment ?? Comment your views below !!