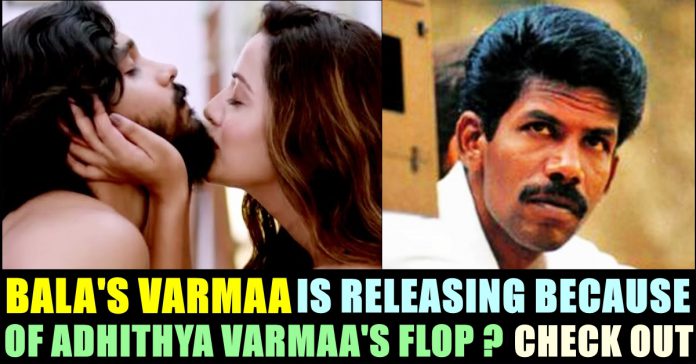 The film which was re shot with new cast and crew, was released on November 21. As soon as the film released, reviews poured from all over the internet from those who watched the movie. However the film doesn’t made much impact as the previous two versions of it received exceptionally good reviews. Vijay Devarakonda’s Arjun Reddy and Shahid Kapoor’s Kabir Singh were the two of the biggest break for everyone who were associated with the project.

Earlier, director Bala’s completed version of the remake, titled Varmaa, which was initially scheduled for release in March, was scrapped at the last moment, after the film’s production house, E4 Entertainment announced that they were not happy with the final product. They went on to shoot a new version from scratch with an almost completely new crew, retaining only the lead, Dhruv, and Arjun Reddy-music director, Radhan. The new team included October-fame Banita Sandhu as the female lead, actor Priya Anand, and cinematographer Ravi K Chandran. Anbu Thasan, who was last seen in Kolamavu Kokila, plays the role of Dhruv’s friend in the movie.

Now as Adhithya Varma has almost completed its run, buzz is doing rounds that Bala’s Varmaa is going to be released in Netflix, an online streaming platform. Few even stated that Varmaa is releasing due to the loss caused by Adhithya Varmaa. Though there is no official confirmation yet, the news is widely believed as true and fans can’t wait to witness the raw version of Arjun Reddy.

Dir Bala’s #Varma will be coming soon in NETFLIX..#Waiting pic.twitter.com/H8oWfzBvjy

Hope it will give the great change for dhruv
We can see the real and the purest acting in this .
Marna waiting⚡#Varma *atha Bala daa🔥 pic.twitter.com/VCM4itAndc

@NetflixIndia has read all our minds. They are going to release Bala Mama's version of #Varma

Eager to know how a original director like Bala would have tweaked the scenes while remaking a film. This is his first remake indeed. #DhruvVikram

Since #AdithyaVarma dint do well at the Box office.. producers are planning to release #Bala’s version #Varma via Netflix… #Cinenews

What do you think on Bala’s Varma releasing on Netflix ?? Comment your views below !!