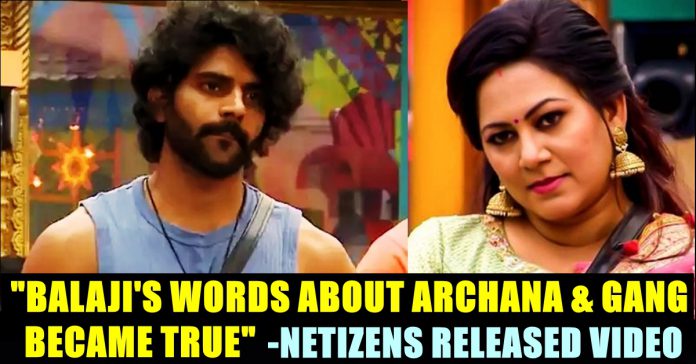 Samyuktha getting evicted from the Bigg Boss house on the weekend episode is the latest update about the Kamal Haasan hosting show. As far as the three promotional videos that got released today, showed a glimpse of the nomination process. Through the three promos, we could understand that Shivani is getting nominated for the second time in the 57 days. Ramya Pandiyan, Sanam Shetty, Aari Arjunan are some of the other contestants getting nominated for this week.

On the 56th day of the show, the first ever “Kurumpadam” was played by Kamal Haasan. It was played to make sure that Aari never foul mouthed about Samyuktha’s motherhood. However, ardent followers of the Bigg Boss show who couldn’t keep calm, have released several “Kurumpadams” so far against almost all the contestants. They are chopping out the particular video segments they want and letting it do rounds in social media platforms.

In the weekend episode, Kamal Haasan called out the gang of Archana and co and advised them not to misuse the term “Love”. The five members gang which includes Archana, Rio, Soma shekar, Nisha, Jitham Ramesh are calling themselves as “Love bed” gang. Balaji Murugadoss who dislikes the strategy being handled by the “Love bed” gang, made a strong statement against them in front of Kamal Haasan in the weekend episode.

“If anyone wants to get nominated next week, just confront anyone from the “Love bed” gang. you will get the nomination by default” said Balaji while talking about them. Now, in a way of proving him right, on Monday’s promo, we could see Ramesh, Nisha, Rio from Archana group nominating Ramya Pandiyan.

Ramya Pandiyan confronted Rio throughout the week and gave him just one star when she was asked to rate Rio’s captaincy. She argued with him for not informing her about her role in the kitchen team. Fans who are following the show keenly, chopped the key moments, aligned it and released it as a “Kurumpadam” in favour of Balaji.

However, it is notable that Balaji gave five out of five stars for Rio’s captaincy and save himself from getting nominated by the “Love-bed” gang. A set of followers are eagerly waiting for Archana or Nisha to get nominated in order to evict either of them once and for all to make the game look more interesting. Rekha, Vel Murugan, Suresh Chakravarthy, Suchithra and Samyuktha got eliminated from the show so far. Aajeedh got evicted and saved himself by using a pass he won during a task.

Rape is the fourth most common crime against women in India. A large number of rapes go unreported in various countries including India. The willingness to...

In the success meet of "Don", distributor Udhayanithi Stalin who is also acting in films as a protagonist for a long time, revealed that...