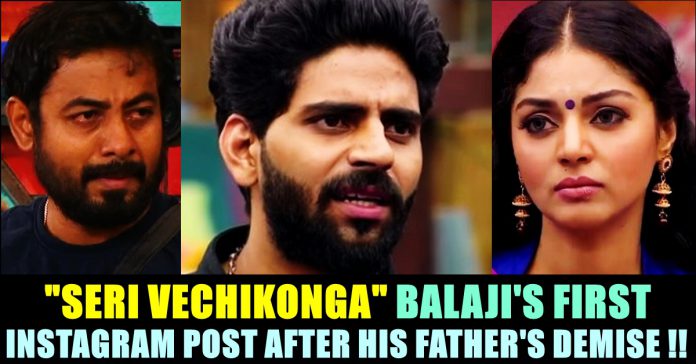 Bigg Boss season four’s most talked about contestant Balaji Murugadoss’s father passed away on Tuesday and the news was revealed by his brother Ramesh who entered the Bigg Boss house as a guest. Reason behind the demise is unknown and Balaji, one the day of the demise, uploaded a tweet saying “This shall too pass”. Now, the aspiring actor has came up with an Instagram post confirming that he is fine. His co-contestants such as Suresh Chakravarthy, Aari Arjunan and Sanam shetty uploaded tweets offering condolences.

“Deeply saddened to hear the demise of Balaji Murugadoss’s Father.. May the family have the strength and courage in these tough moments.” wrote Bigg Boss title winner Aari in his tweet and expressed his condolences. Bigg Boss Aari and Balaji Murugadoss who always involved in heated arguments during their course of Bigg Boss stint, came in good terms with each other towards the end of the show.

Deeply saddened to hear the demise of Balaji Murugadoss's Father.. May the family have the strength and courage in these tough moments.

Suresh Chakravarthy, another participant of the Kamal Haasan hosting show, wrote “Loosing a parent is very great loss. Some prefer to mourn in private. Understanding their sentiments one has to give them that space. Heartfelt condolences Bala.” in his tweet.

Loosing a parent is very great loss. Some prefer to mourn in private. Understanding their sentiments one has to give them that space. Heartfelt condolences Bala.

Model and actress Sanam shetty also came up with a tweet to console her co-contestant Balaji Murugadoss. “I offer my heartfelt condolences to
Balaji and family. Prayers for your father Bala.. may him rest in peace. “ her tweet read.

I offer my heartfelt condolences to @OfficialBalaji and family. Prayers for your father Bala.. may him rest in peace. 🙏

Meanwhile, Balaji Murugadoss who was pretty much active in his official Instagram account, took a break and came up with a post on Wednesday. He uploaded a picture of himself from the show “Bigg Boss Kondattam” and said “no matter how many hurdles you are facing in your life, no matter who says what, there is always one solution for everything and that is to say “Seri Vechikonga” (OK, keep it to yourself) before moving on”

Balaji also confirmed that he is well and fine by writing “Life la Evlo problems vandhalum Yaru Ena sonalum There’s one solution
“Seri vechikonga” 😁 Solitu poitae irukanum❤️ Thanks for all the love I’m well and fine❤️” as his caption.

Through the task, Balaji referred to his father and said that he gained his father an identity by improving his lifestyle. The loss Balaji faced has left his followers extremely dejected and now, this recent post of him made them happy.

Previous article“No One Can Tell Me What To Do” – This Indian Cricketer Turned Down Rs. 80 Lakh Offer !! WATCH
Next article“Stalin Varar Challenge” Of DMK Party Facing Criticism !!