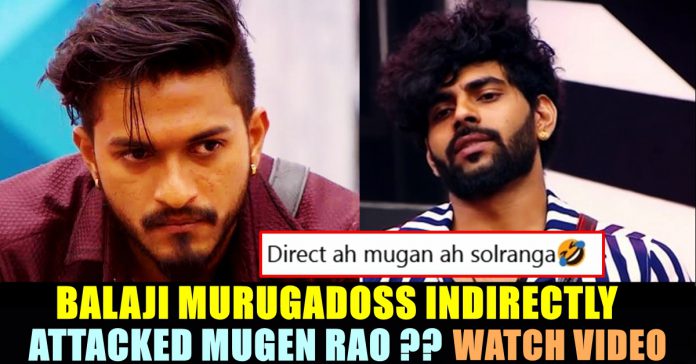 Balaji Murugadoss openly criticized the title winners of Bigg Boss 1, 2 & 3 by saying that they won the titles by doing nothing and said that he is going to change the Myth. He said it to Anitha Sampath and she acknowledged him as well. This statement of Balaji had created a ruckus among the followers of the Bigg Boss show.

Balaji had said that the myth of people winning the Bigg Boss trophy who keep mum throughout the season should change. “How could they win the trophy by eating groundnuts throughout the season?” he asks to which Anitha replies by saying that people who played the game that way have won it in previous seasons. “It will change” says Balaji.

This statement from them had triggered many people who follow the show to comment. “They are just registering to camera and audience. They know Som has won people’s hearts the right way! So enalaamo try panraanga! Panatum!” a twitter user said whereas another one wrote “So he thinks he’s going to win the show.. indha vaati apdilaam nadakkadhu it seems… I doubt Balaji will realize that he is not the only vocal person on the show”. Many of the twitter users thought that Balaji has took a sly dig at Mugen Rao, title winner of Bigg Boss season 3.

So he thinks he's going to win the show.. indha vaati apdilaam nadakkadhu it seems…
I doubt Balaji will realize that he is not the only vocal person on the show 🙄

They are just registering to camera and audience. They know Som has won people's hearts the right way! So enalaamo try panraanga! Panatum!

arav was good but riythvika and mugen were mixture

All title winners were mixture eaters. This time that should change. Eliminate #shivaninarayanan as recommended by #BalajiMurugaDass

The first person who is eating verkadalai is Shivani.. avangala thaan evict pannanum

As far as the ongoing Bigg Boss season is concerned, Rekha, Vel Murugan, Suresh Chakravarty, Suchithra and Samyuktha got eliminated from the show due to the less votes they received from the audience. Ajeedh got evicted and saved himself by using a pass he won during a task.