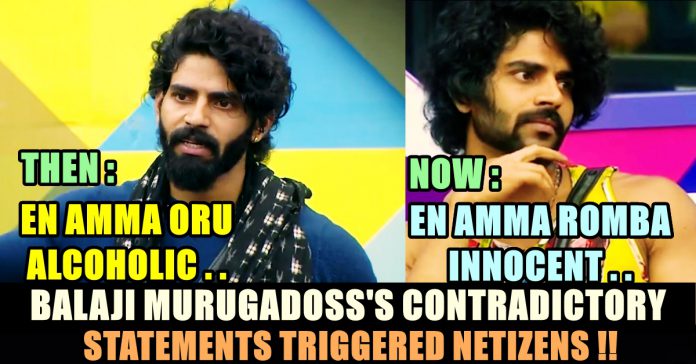 Bigg Boss contestant Balaji Murugadoss’s contradictory statements triggered netizens to raise various kind of questions in social media platforms. He who occupies most of the screen time comparing to other contestants, has earned equal number of fans and haters within the 30 plus days he stayed in the house. Now, a video of himself making contradictory statements about his mother, has raised the eyebrows of the netizens who are keenly following the Kamal Haasan hosting show.

Balaji said that he has suffered severe physical abuse by his father in childhood. He said that his father who is an alcoholic, used to beat him up with the tube used on LPG gas cylinders when he was sleeping. “I would feel sudden pain in the head. Would run here and there with pain. Only after seeing my dad with the gas tube, I realized that he has beaten me.” Balaji said in the episode who added that his Mother also involved in abusing him physically after consuming alcohol.

“When I called my mother for help, she came from Malaysia and started having alcohol with my father. Both will keep sleeping after consuming alcohol.” he said in that episode.

He said no one welcomed him after becoming Mr.India other than his four friends in that episode. Now, in a recent episode, he could be seen saying that his mother was so innocent that she didn’t even know about his achievement of becoming Mr. India.

“Initially, I was planning to celebrate my Mr.India award in the place I stayed. But I changed my decision in the last minute and said that I want to celebrate it at my home. When I went there dancing in my favourite folk style, My mother took “Aarthi” for me. But she didn’t know what achievement I did. She didn’t know till she was alive. She was that much innocent” Balaji said.

Bala ~ Mom Alcoholic & only 4 people came to receive him after he won Mr.India

Bala ~ Mom Innocent & came to house with mela thalam after he won Mr.India

On seeing this contradiction, a set of people are expressing their regret for voting Bala all these days whereas another set of people supported him saying that these two videos makes sense. They said that there is no wonder in a woman who is innocent consuming alcohol.

Like a fool I voted him.after listening to his idiotic story….I really regret voting him

Being an alcoholic has nothing to do with being innocent. You can be innocent and an alcoholic at the same time.https://t.co/tHhNKMitpY

Comment your views on this video and the reactions it received !!