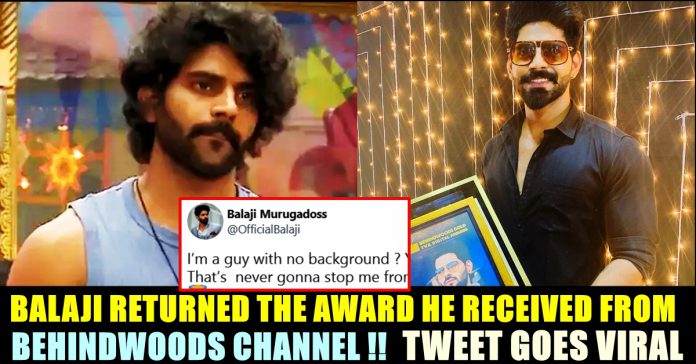 On Sunday, Bigg Boss fame Balaji Murugadoss came up with a series of tweets expressing his disappointment over popular youtube channel “Behindwoods”. He who received “Biggest sensation on reality Television award” at Behindwoods Gold TV & Digital awards, said that he is returning it. Through the tweets he had posted, it could be understood that the model got upset over the channel not telecasting his award winning speech or moment. Tweets of the Bigg Boss season 5 runner up suggests that he had spoken something about the Bigg Boss reviewers of the channel.

The aspiring actor is currently enjoying 7 lakh plus followers in the photo/video posting social media app. After coming out of the house, he garnered huge reception from the followers of the Bigg Boss show and also received awards, recognitions from a number of youtube channels and private firms. He was also invited as a guest to open shops at various districts.

On Sunday, Balaji came up with a series of tweets, expressing his dejection over Behindwoods youtube channel. Tagging the official twitter account of the youtube channel, Balaji said that the channel gave green signal to their reviewers to tarnish the image of every Bigg Boss contestant except one. He further said that they couldn’t accept his 2 minute review about the reviewers of their channel and failed to telecast his award winning speech or moment. It is notable that popular film producer Ravinder Chandrasekhar reviewed the show in the Youtube space for Behindwoods channel.

“So this @behindwoods who gave green signal to Tarnish every BB contestants in the name of review except one. couldn’t take my 2mins review about their reviewers on their own stage so they didn’t telecaste my award winning speech or moment, I think Spoke right I guess I’m proud” Balaji’s first tweet read.

So this @behindwoods who gave green signal to
Tarnish every BB contestants in the name of review except one.
couldn’t take my 2mins review about their reviewers on their own stage so they didn’t telecaste my award winning speech or moment, I think Spoke right I guess I’m proud ❤️

“I’m a guy with no background ? Yes ! That’s never gonna stop me from speaking my heart out” the model said in his next tweet who went on to post another tweet saying that he is returning the award he received from the channel.

“Returning it” said Balaji by uploading the pictures of the awards provided by the youtube channel. Here’s the tweet :

Balaji is also sharing stories of his fans, followers in his official Instagram account. The posts shows people suporting Balaji by uploading memes, trolls against the youtube channel. An hashtag saying “We Stand For Balaji Murugadoss” is also trending in the micro blogging social media site. Check out some of the posts below :

You Deserve better 😇 Throw this on face 🔥 We love you , We are here for you ! @OfficialBalaji #WeStandForBalajiMurugaDoss pic.twitter.com/92T6v5Jmbt

KARMA IS BOOMERANG😎 Yu will get it back soon @behindwoods. Tat day is not much far🤬#WeStandForBalajiMurugaDoss https://t.co/O8qZcmSV6y

#WeStandForBalajiMurugaDoss So proud that you did this
Talking the right things never had and will never have time to be heard @OfficialBalaji
Stay strong we're with you boy https://t.co/W6eHZy3aO2

"U GUYS USE #balajimurugadoss PIC AND NAME AS THUMBNAIL TO INCREASE VIEWS" but u guys can't post his speech video r the winning moment (How cheap is this guys?) Disappointed💔😏#WeStandForBalajiMurugaDoss @OfficialBalaji pic.twitter.com/y9HbG9smRL

But how smart your ! U wil release all his pics and u wil show him in promos but award vangurathu kamikamatinga
Nalla panringa paa
Remember one thing god is there watching everything ! #WeStandForBalajiMurugaDoss